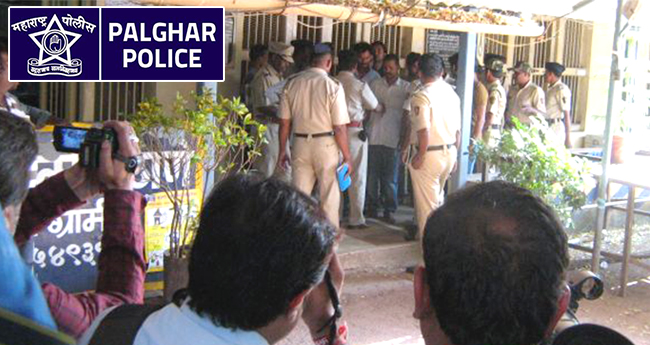 While the internet has become a medium of mere show off, slamming and insulting people, there are also people who tend to overlook the positive power of social media which can drive quick action and save lives.

The best example of this was when a passenger named Adarsh Shrivastava, helped rescue 26 minor girls from being trafficked with one tweet.

But, today here’s a story of a six-month-old girl who was saved by Palghar police from a waterlogged building in Manikpur, on 11th July. Past few days witnessed heavy rains across the country and most of the cities mainly Mumbai was all submerged in deep waters making the commuters face difficulties.

NDRF conducted rescue operations to save stranded individuals, Sharad Jha, a media professional, tweeted at 11 am.

Addressing the Palghar police and other authorities he wrote, “We are stranded in Sun city, Vasai west area with heavy water logging and my daughter is in serious condition vomiting since morning. We have no means to move out for doctor. Need immediate doctor’s support.” It wouldn’t have been long before the police control room insinuated the Manikpur police headquarters. Constable Gite was given the duty to save the kid and take her to the closest Astha clinic. Be that as it may, it was difficult.

Talking to a leading web portal, Gite said, “I was asked to go to the Irish building in Sun City to help some people. When I reached the spot, there was water up to the waist at the entrance. However, I just walked in and managed to reach the third floor flat.”

We are stranded in Sun city, Vasai west area with heavy water logging and my daughter is in serious condition vomiting since morning. We have no means to move out for doctor. need immediate Doctor's support. @CMOMaharashtra @Dev_Fadnavis @JPNadda @poonam_mahajan @MrsGandhi

When he made it to the third floor, the constable enclosed the child by delicate covers and walked out to look for medicinal help.

He further said, “I just thought her to be my child. I would have done the same.”

We have rescued the Girl.. Her name is Chetna and she has been sent to Astha Hospital.. awaiting further details from the officials..

The baby named, Chetna Jha, was quickly rushed in a police vehicle and admitted to a private hospital. She is now getting well and will b under observation for some days.

27-year-old Constable Gite, after the baby was admitted to the hospital was full day on his duty to help out the people stranded in the rains.

He told a news portal, “There is severe waterlogging, and we are responding to all calls, as soon as possible. We have even helped some people without charged cell phones to use our phones and make calls.”

When asked about the delay in alerting officials about the situation, another officer said, “The delay in relaying information occurred because of poor connectivity. By the time the constable was assigned and he reached the spot, some hours had passed.”

We wish the baby a speedy recovery and hope Constable Gite is rewarded for his good deed.