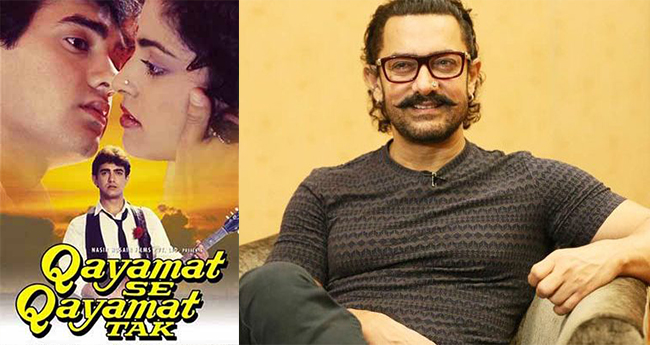 PK actor Aamir Khan also referred to as ‘Mr. Perfectionist’ of Bollywood has won hearts of fans with his unique performances through the years. After performing as a child artist in some movies Aamir made his Bollywood debut in the year 1988. His first movie was ‘Qayamat Se Qayamat Tak’ where is was paired with former Miss India ‘Juhi Chawla’.

In his childhood, he acted in Yaadon Ki Baaraat’ and ‘Madhosh’. He grabbed stardom after the release of ‘QSQT’ which was a big box office hit. This year the movie has completed 30 years and it reminds about the cute young guy from the movie who is now one of the most successful actors in the industry. Aamir Khan played a boy next door who falls in love with Juhi Chawla. It was a path-breaking movie for both the actors and they, later on, became the most demanded actors in Bollywood. Aamir Khan who earns millions with his movie business talked about struggling days in a media interaction. He said “After ‘Qayamat Se Qayamat Tak’ (first commercially hit film), though I had a successful film, did not have money to buy a car. I used to use public transport until I started getting mobbed by people who recognized me in public.”

Even after the release of his first film the actor didn’t have much money in his pockets. He used to travel in public transport at that time. Now what’s shocking is the amount he was paid for ‘Qayamat Se Qayamat Tak’. The actor earned RS 11,000 with his first film as the main lead. Earlier in an interview, Salman Khan was also noticed saying he earned around RS 75 for his first commercial advertisement.

QSQT the foundation stone of my career, what a lovely time we had, laughing, playing games, rehearsing, fighting & shooting in between 😂🙏🙏Ever grateful to Nasirsaab, Mansoor, Aamir, Nuzhat, Anand Milind , Alka , Udit & QSQT team! @_aamirkhan

Talking about work-front, Aamir will next be seen in ‘Thugs Of Hindostan’ which is directed by ‘Vijay Krishna Acharya’ under the banner ‘Yashraj Films’. Amitabh Bachchan, Katrina Kaif and ‘Dangal’actress ‘Fatima Sana Shaikh’ are co-starring with Aamir in the movie.