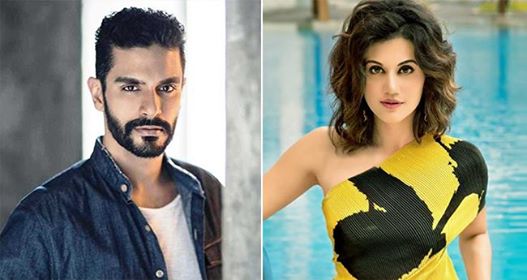 Angad Bedi is one of the well-known actors in the Bollywood industry. The ‘Pink’ actor will soon be seen with co-star Taapsee Pannu in Soorma. The actor opens up about the film and co-stars in an interview with a leading daily.

“I have been fortunate that Pink has been that film, which gave my career a push. I owe a lot to Shoojit Sircar for having faith in me and my co-stars Taapsee Pannu and Amitabh Bachchan sir… I am lucky nobody has been able to slot me in a particular role. I want to do films that will make an impact and project me in a different way,” Angad told a leading portal.

#regram … only caus I may have pressed delete ! #fatfingers 😊📸 @prasadnaaik

The actor believes it is the right time for him to do a film as a leading man and reach out to a wider audience.
“A producer and a good maker has to back me, my last few films have been hit. I have delivered, it is about time that someone backs me as a lead. I am ready for it. Everyone has time.”

@taapsee Aajaaa Pannu!!!! EK hore Vaari!! Lets do some Bhangra and play some hockey this time.. let’s be at peace with each other 😂🤣🙏. Minal and rajvir can be friends after all😎 what say @ronnie.lahiri @shoojitsircar #soorma

“Rajkummar Rao came from the same space. Today films are all about characters. A good film works for everybody. I would like to get a wider audience. With Tiger Zinda Hai I reached out to Salman Khan’s market, through Soorma I can reach out to Diljit’s fans. As an actor I want to have my own market too,” he says.

Soorma is a biographical drama based on the life of hockey player Sandeep Singh, played by Diljit Dosanjh, Angad in essaying the role of his elder brother Bikramjeet.

“Hockey is a different sport. I had to unlearn cricket to learn hockey. It is easier for someone who is not a sportsperson to pick up hockey. They just have to learn it.” Angad and Diljit spent six hours daily for a couple of days to learn the game from real-life Sandeep and Bikramjeet.

“Both Diljit and I had to do a lot of core exercises -running, jogging, jog while dribbling etc. A lot of preparation was required for this film. Both Sandeep and Bikramjeet have different styles of playing. Bikramjeet is high on energy and I had to observe him in order to play his part right on the screen,” he adds.

Soorma also marks Angad’s reunion with Pink co-star Taapsee and he is happy to have shared the screen space with her again. “People will see a totally different side of both of us. It is a different role for both of us. Hopefully, we can do another film together,” he says.

Taapsee on other hand was recently seen in short film Nitishastra in which she plays a self-defence instructor. Soorma is a film directed by Shaad Ali and produced by Sony Pictures Networks India, The CS Films is scheduled to release on July 13.