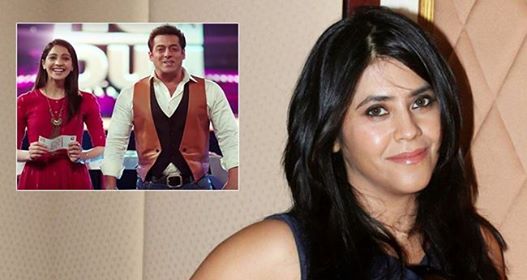 A gorgeous new girl is stepping into the glamour world. Her name is Yogita Bihani. The credit goes to Salman Khan as she was seen with him in Dus Ka Dum. She bagged her very first role in Ekta Kapoor’s much talked about TV show Dil Hi To Hai.

Salman Khan has given a break to many people like Katrina Kaif, Sneha Ullal, Daisy Shah and Zareen Khan. This time around it is Yogita who was seen in Salman’s TV show Dus Ka Dum.

Yes, I know it's real but I have to pinch myself after every minute. @ektaravikapoor @balajitelefilms Thank you for this beautiful journey ahead. @beingsalmankhan Thanks for being a lucky charm for me as well! @castingchhabra @mukeshchhabracastingcompany Thank you for making me part of Dus Ka Dum Advert and a great opportunity to work with @niteshtiwari22 . @_mumbaimirror Grateful for this article.

An overwhelming response that the lady received on the show, Sony TV recommended her name to Ekta Kapoor. Ekta’s team was reportedly floored by Yogita’s confidence and screen presence.

Here is the video:

The lucky girl has bagged her very first role in Ekta Kapoor’s TV show Dil Hi To Hai. Confirming the news, Yogita said to a daily, “It could not have been bigger than this. For any newcomer, bagging Ekta Kapoor’s show is the biggest platform that one can get. I am super excited and equally nervous too,” she added.

Sharing more about her role, she said, “The role of Palak Sharma is that of a happy-go-lucky person with strong feminist opinions. I am looking forward to start shooting soon and hope that the audience appreciates my work.” Dil Hi Toh Hai will premiere soon on Sony Entertainment Television.”

With my boss!!!! #sindhicontrol #mothership

The show was rumoured to be a remake of Kabhi Khushi Kabhi Gam. Ekta took her twitter and said it is just making a show on a business class family.