After Waiting For 60 Years, Villagers Of Gazalpur Constructed Bridge By Themselves 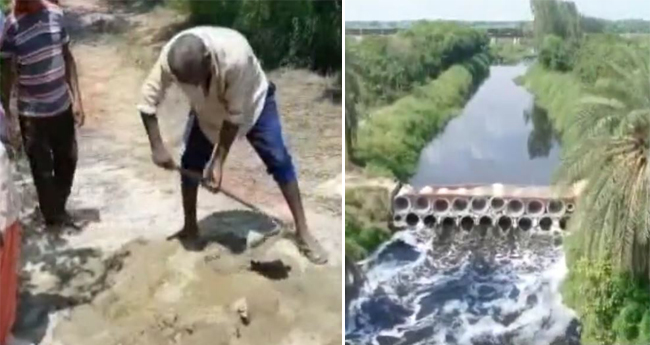 It is the government’s responsibility to provide the basic needs to the citizens of his country. From safe roads, bridges to everything which a common man needs. However, many a time, the government fails to do so which creates difficulty for the commoners. But all can do is just wait for it till the concerned authorities take an action.

Well, that’s not the case with the people living in Gazalpur. After facing a lot of difficulties and losing lots of villagers’ life, people in this village constructed a bridge by themselves and also saved a lot of lives. Yes, you heard it right!

There’s a scary bridge which is 60 kilometres away from Delhi and is known as Kali Nadi’s bridge (Black River). Approximately 250 trains pass by this bridge on an everyday basis. Many people have lost their lives while crossing this bridge as there was no other way for the commuters to travel. One of the residents of Gazalpur village said how his daughter, granddaughter and son-in-law died while crossing the tracks.

Actually, the thing is without the absence of this bridge on Kali Nadi, it took 12 kilometres to reach the people Hapur. But they can reach Hapur just by covering 4 kilometres if there’s a bridge on Kali Nadi. People have either badly injured themselves or died whenever they have tried to cross this river.

Even after the tragic loss of many people’s lives, the government in the past sixty years failed to construct a bridge for the commuters. The villagers, at last, decided to build the bridge by themselves.

Well, the villagers tried to contribute to this as per their capacity. While poor people, who were not able to help financially, made sure they help as a labourer. Everyone in the village took equal efforts for the construction of the bridge.

And the best part was not just men, even women and old aged people gave their contribution. The financial hurdle is still a problem but 4 lakh which was collected has been utilized to build this kind of a bridge.

The villagers are well aware that politicians are not going to do anything and it’s the people who will have to do something to save themselves from such hazards and fatal accidents.

Well, the efforts of the villagers have paid off and they have successfully constructed a bridge!