Akki wishes luck for Ayushmann Khurrana’s next: All the best from one Bala to another. Aap jald aayein, hum aagaye hain 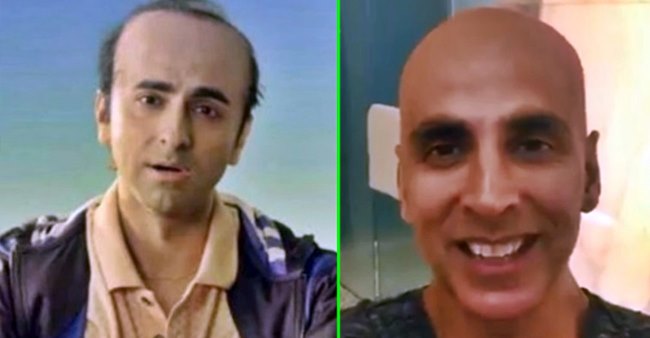 Akshay Kumar and Ayushmann Khurrana have been bagging praises from all sides for their bald appearances in their respective movies – Housefull 4 and Bala.

But, a bald head is not the only resemblance between Akki and Ayush.

The more interesting thing is that the on-screen roles of both the stars are named Bala. Whilst Akshay will don the role of Prince Rajkumar Bala (for the time period of 1419) in Farhad Samji’s Housefull 4, Ayushmann will don the titular character of a man with name Bala, who suffers from untimely balding in his 30s in Amar Kaushik’s movie.

Acknowledging this resemblance, both stars wished each other best of luck for their respective projects.

Yesterday the producers of movie ‘Housefull 4’ rolled out one more song named ‘Bala’ that features none other than Khiladi Akshay Kumar.

Each and every one became fan of the song since its release. Even super star Ayushmann Khurrana also loved the song.

Bala turned viral all over the web in no time. After Ayush praised Akshay on the song titled Shaitan Ka Saala on Instagram, Akki is all praise of the video.

Get ready to groove with Bala, #ShaitanKaSaala in just a few. Till then here’s a dapper, Bala with the ladies! #Housefull4 @kritisanon @hegdepooja @kriti_official pic.twitter.com/KxJ2Qgn51X

When Akki came to notice this thing, he at once reacted in his brilliant flair and wish multi-talented star Ayushmann Khurrana via a special twitter video as Ayushmannn’s next flick ‘Bala’ is on the way for release.

Akki shared a note on Twitter and wrote, “Waah Bala, kamaal kar daala! All the best brother” and said in the video,”All the best from one Bala to another. Aap jald aaye hum aa gaye hai.. Good Luck brother and see you soon.. Byee”

Ayushmann then answered Akki and wished him all the luck for his next release ‘Housefull 4’ and said,”Bala ko pukara #Bala aa gaya! Best of luck @akshaykumarsir. Hum bhi jald aa rahe hain.”

Karan Johar says he has been teaching Yash and Roohi about water conservation...