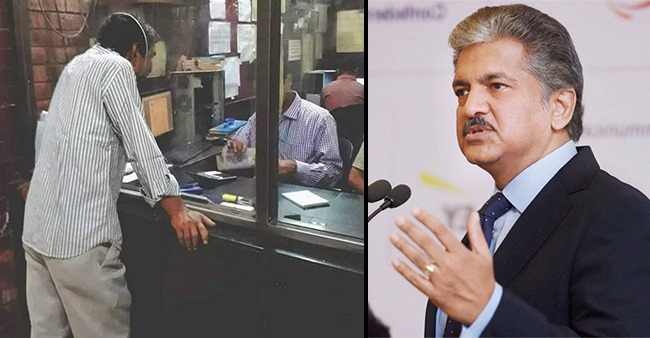 Business tycoon Anand Mahindra is not only known for his business sense but also his witty takes on many things. Many people look up to him as a role model, so his social media accounts have a massive fan following. He is quite active on these platforms and shares many updates and needed information. Mahindra often accompanies these posts with sly remarks and leaves netizens in splits.

Recently, taking to his Twitter handle, Anand Mahindra shared a picture of a man who went a step ahead to have a conversation with a person sitting behind a glass wall. In the picture shared by industrialist, the man seems to be standing in what looks like an office.

The picture shared by the Chairperson of the Mahindra and Mahindra Group is now making rounds on various social media platforms. It features two people separated by a transparent wall with a small hole cut in the middle, the one which on the cashier counters in banks or toll booths.

The amusing part of the picture is that instead of standing at some distance from the partition, the man has put his head inside the cut-out to have a conversation with the person sitting on the inside of the cabin.

Sharing the picture on the micro-blogging site, Anand Mahindra captioned it, “Clearly, we’re not accustomed to social distancing. But it’s time to do our bit: pull our heads back and mask up (sic).”

Clearly, we’re not accustomed to social distancing. But it’s time to do our bit: pull our heads back and mask up! pic.twitter.com/cqK9apinMq

In the now-viral picture, neither of the two men are wearing masks and are also negating the rule of social distancing. Owing to the ongoing surge in positive cases in India, following the health-safety protocols has become mandatory.

As the picture is getting re-shared on social media platforms, hearsay suggests that it was clicked back in 2019 when everything was normal. So, the men in the picture should be forgiven.

However, no conclusive evidence is found on the same but hopefully, everyone is following social distancing rules to curb the spread of the disease.

Published by siddhi ajgoankar on 08 Apr 2021

Riteish Deshmukh’s Hilarious Acceptance Speech On ‘Not Being Nominated’ At Awards Show Leaves Netizens In Splits...