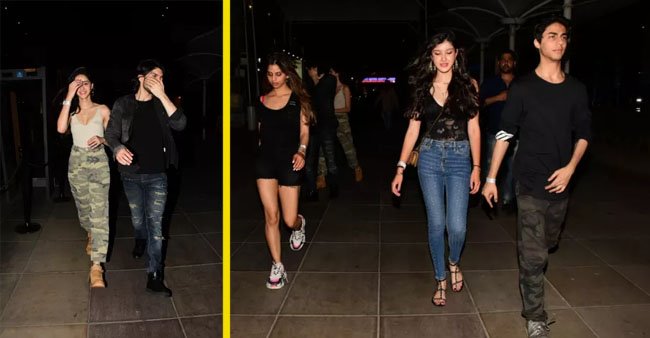 In Mumbai, on Friday late night, many famous Bollywood star kids including Shah Rukh Khan’s son Aryan and daughter Suhana, ‘Student Of The Year 2’ actress & Chunky Pandey’s daughter Ananya Panday with her cousin Ahaan, Sanjay Kapoor’s daughter Shanaya and others were seen at a close friend’s party at a restaurant.

Their party pictures of star-kids have taken the internet by storm as so many youngsters of India follow them & these kids are much popular among them.

Meanwhile, Ananya Panday who has just debuted in Bollywood with the movie “Student of the year 2” & is daughter of the famous actor Chunky Pandey was spotted with a mystery boy who seemed to be hiding his face from the camera.

However, he was throughout clicked with the ‘Student of the year 2’ actress Ananya

In one picture which was taken from somewhat distance, the glimpse of the boy got to appear and he is none other than Karan Mehta, who is known to be good friends with Aryan Khan and other star-kids.

Karan often hangs out with these star-kids, he was also present at another star-kids’bash which took place two days back and was attended by Aryan, Shanaya and Ananya.

Now the question arises is, are Ananya and Karan are just friends or something else is brewing between them?