Anil Kapoor Has A Gala Time With CISF Soldiers, Dances On ‘My Name Is Lakhan’ 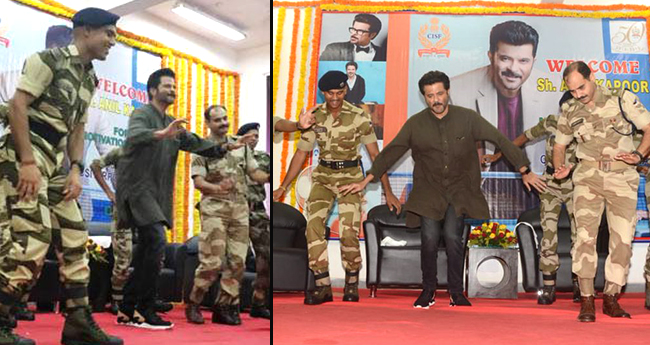 Bollywood’s superstar Anil Kapoor has been a part of the film industry for decades. The actor is still ruling the film industry with his hotness even at the age of 61. He is one of the fittest actors of Bollywood inspiring man to be like him.

Anil’s stardom has only risen with time and has been getting some outstanding roles which prove that he is still a tough competition to his contemporaries.

The veteran actor celebrated 50 years of Central Industrial Security Force (CISF) for their sheer dedication to protecting people in our country.

Today we celebrate the golden year of #CISFMumbai as it completes 50 years of unwavering dedication to protect us. Our jawans & their families sacrifice so much to keep us safe! What makes me even more proud is that 60% of the 600 jawans present today are female! #CISFIndia

Anil enjoys a huge fan following on the social media and is also quite active in keeping his fans updated about his whereabouts. On Sunday 8th July, Anil took to Twitter to share a few pictures of himself enjoying with CISF personnel.

Anil captioned the image as, “Today, we celebrate the golden year of CISF Mumbai as it completes 50 years of unwavering dedication to protect us. Our jawans and their families sacrifice so much to keep us safe. What makes me even more proud is that 60 per cent of the 600 jawans present today are female.”

Anil has a gala time with the CISF jawans and he also entertained them with his dance moves. Anil took over the stage and danced his heart out on his famous popular track My Name Is Lakhan.

Not just Anil but even the jawans couldn’t stop themselves from sharing the stage with the superstar and also danced with the Kapoor.

On the work front, Anil has a lot of films in his kitty. The actor was last seen in Race 3 in a stylish avatar and won several hearts. Anil will be next seen in Fanney Khan where he will be sharing screen space with beauty queen Aishwarya Rai Bachchan after decades. The movie also stars Rajkummar Rao and Divya Dutta in important roles. The movie is directed by Rakeysh Om Prakash Mehra and slated for 3rd August release.