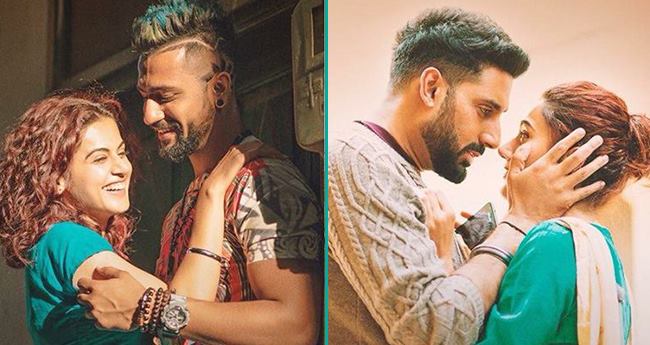 Here comes the fantastic Friday as a new movie released and that too of filmmaker Anurag Kashyap. With a wonderful trailer, we all have enjoyed and seen how the characters in the movie are going to be. Let’s talk about the review before booking the tickets.

See u in theatres :) #Manmarziyaan In theatres now ! 📷: @aalok_soni

Taapsee Pannu is shining like a star in the movie even after having two main lead actors Vicky Kaushal and Abhishek Bachchan. And we bet Taapsee’s fan will watch the movie in the theaters only for her. Also, the movie got outstanding rating stars.

Taapsee is playing Rumi who is lightheaded and playful who don’t think too much opposite to her name, and the credit for it goes to both Kashyap and writer Kanika Dhillon. As we said Rumi is highlighted in the movie, she is madly in love with Vicky (a wannabe DJ) and owns an Amritsar-based hockey merchandise store. As she changes her mind and wants to get married according to her family’s wish to find some subtle-minded guy, she marries London-returned banker Robbie. With this love triangle get shaped between Rumi, Robbie, and DJ Saandz aka Vicky.

This movie is well written for Taapsee’s character Rumi and it’s her best performance ever which will help her to shape her career in better aspects.

Vicky aka DJ Saandz gave an on-point performance as his character wants, all stubborn with body language who loves Parathe. His lack of taking responsibility made her gf Rumi marry some other guy. Vicky shows a different side in this movie and once again he showed us how effortless he is.

Talking about Abhishek who made a comeback after two years with Manmarziyaan, played underperformed throughout the movie. Playing a good boy in the movie it’s his character that didn’t offer much to act. So, it’s his charm if the movie went well for him.

#onset photo taken by the supremely talented @khamkhaphotoartist. The 2nd photo is me returning the favour. #Manmarziyaan #TakeTwo

Yet again, Anurag came up with a mixed genre of romance, drama, and comedy plus in his script, it seems both the main lead actors are not very much pleasurable in the movie as Rumi is all above.

A big round of applause goes to the music composer Amit Trivedi who took the nation by storm with his songs like ‘Daryaa’ and ‘F for Fyaar’. Plus an A for the provocative cinematography.

If you are a fan of Anurag Kashyap, you will understand his magic who put the viewers into his flawed character’s riddled mind.

Indian stars Taapsee, Abhishek Bachchan & Vicky Kaushal snapped sharing a camaraderie along with the director Anurag Kashyap at the Red Carpet Premiere of the film, Husband Material a.k.a Manmarziyaan 🎬 at #TIFF2018

In the end, the movie symbolizes the idiom that “All matches are made in heaven”. For every Pyaar, there is Fyaar; with the sense of responsibility, there is a moment of abandon.