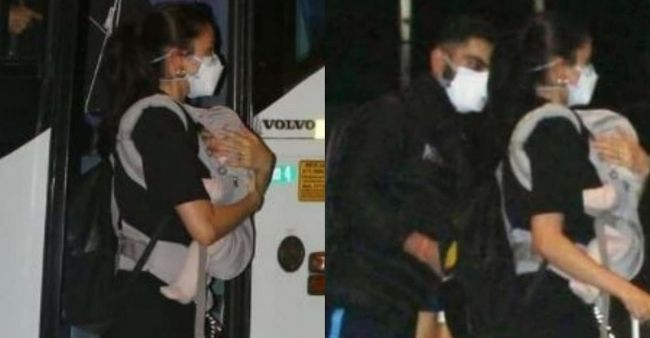 Anushka Sharma and her four-month-old daughter Vamika were seen with Virat Kohli, the Indian cricket team captain, as the team departed Mumbai late at night on June 2 for the World Test Championship finals between India and New Zealand, which is scheduled to begin on June 18 at the Ageas Bowl in Southampton, England.

Pictures of Virat Kohli and Anushka Sharma on social media have gone viral, particularly the one’s in which Anushka is hugging Vamika as she departs the team bus and heads to the airport. Anushka can be seen in the viral photos hugging her daughter very close to herself, wrapping her hands over her and placing one hand on her head to shelter her and keep Vamika away from the media. This is the first shot in which fans get a glimpse of Vamika’s face.

Have a look at the pictures: Virat recently stated in a live Instagram session that they have decided not to introduce their child to social media until she understands what it is and can make her own decisions. Anushka also previously stated in an interview that Virat and her have given it much thought and that they do not wish to raise their child in the public eye.

Anushka Sharma was most recently seen in the film Sui Dhaaga, in which she co-starred with Varun Dhawan as a wife. She will soon be seen in the upcoming film Kaneda, which is about the rise and fall of a Punjabi gangster and is expected to be released this year. Anushka has also signed for the biopic of the former captain of the Indian women’s cricket team, Jhulam Goswami.