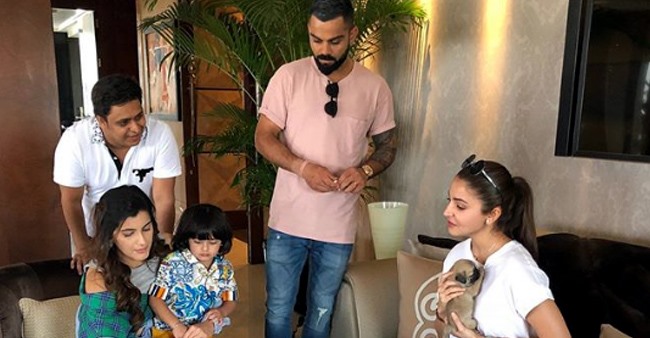 Bollywood Actress Anushka Sharma is always seen standing like a rock beside her loving and caring hubby Virat Kohli.

The Indian skipper has not had the best time in the recent New Zealand tour as India was crushed by the Kiwis and confronted one of the most crucial defeats in recent times.

But Virat Kohli and Anushka Sharma are making sure to enjoy each and every sight of their New Zealand tour before they get back home.

Happy birthday to our founder @rohan.pate who has created woundefull museum for all cricket lovers

A post shared by Blades of Glory Cricket Museum (@bladesofglorymuseum) on Feb 11, 2020 at 4:27am PST

Both of them have been seen multiple times by their fans in public and they have updated with the happenings in New Zealand.

In a recent photo that was shared by fan clubs, we can see the actress and Virat Kohli being engrossed in a casual meeting with friends.

The picture was shared originally by Instagram account, Blades of Glory Cricket Museum, and Virushka were seen in conversation with the owner of the museum and his family.

"To love another person is to see the face of God" -Victor Hugo The thing about love is that it's not just a feeling , it's much more than that . It's a guide , a propeller, a path to the absolute truth . And I am blessed , truly , wholly blessed, to have found it ❤️ 🙏

Virat Kohli was seen wearing a dusty pink T-shirt and blue, while Anushka Sharma looked smart in a pair of classic denims and white T-shirt.

Anushka Sharma was also seen adorably holding a puppy while they chat.

Their fans obviously were excited about the same as one of their social media fan wrote, “aftr all the negativity on TL this is such a positive picture to look at..also how beautiful Anushka looks while holding that little puppy #Virushka.”

Fans have the opinion that Virat Kohli and Anushka Sharma never fail to come out with major couple goals.