Anushka And Varun’s Desi Love Story In Sui Dhaga: Made In India Trailer Is Winning Hearts 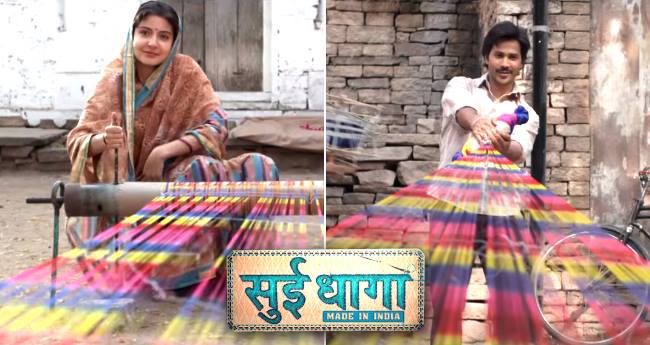 Anushka Sharma and Varun Dhawan have come together for the first time for Sui Dhaga: Made In India with a completely new story. The duo has stepped out of their comfort zone and showed a different side of them for this movie.

After some looks from the flick, the makers have dropped the trailer of the film and it has left us awestruck. The story is of a simple couple Mamata and Mauji and how they struggle to achieve success.

The trailer witnessed a story of small and medium scale industries. Anushka and Varun are seen in a complete de-glam avatar, however, their acting has won our hearts. Though the trailer did not witness a lot of chemistry between them but we are looking forward to seeing their desi romance.

The trailer is full of comedy and some serious drama which leaves us emotional.

Take a look at the trailer here:

The film is set against the backdrop of small-town India and has been shot in several locations including Chanderi (Madhya Pradesh), Delhi and Mumbai.

Sui Dhaga is directed by Sharat Katariya and is bankrolled by Yash Raj Films.

Anushka said in a statement, “Varun and Anushka relished the chance to go out of the comfort zone of being portrayed as glamorous stars. Mauji and Mamta are salt of the earth characters and these characters gave our duo the chance to really push themselves as actors.”

Sharat said, “More than getting a fresh ‘jodi’, the excitement was to get the right actors who will complement each other. And luckily, both of them agreed to do the film and they have done a remarkable job which everyone will get to see on September 28.”