Indian Hockey team on the way of Gold, Creats history to win by 17-0 margin against Indonesia 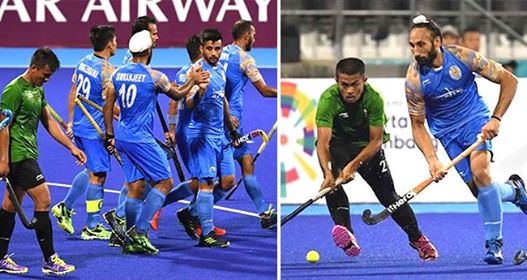 In Jakarta, only a gold medal would satisfy the top-ranked Indian men’s hockey team. It will begin an Asian Games campaign against minnows Indonesia on Monday.

Eyes firmly set on securing a direct berth in 2020 Tokyo Olympics, defending champions India will start as overwhelming favourites against the host nation.

The Indians should have a smooth run till the semifinals, where they maybe taking on either arch-rivals Pakistan (ranked 13) or Malaysia (ranked 12).

It is expected to be a goal fest for India tomorrow and it just remains to be seen how many Harendra Singh’s men can pump in to boost their morale ahead of other pool matches. India’s medal-less show at Gold Coast Commonwealth Games in April had the fans worried but the team bounced back strongly to reach the final of the concluding edition of the Champions Trophy under Harendra’s guidance.

India bumped into world number one Australia in the title clash and lost only in the shoot off.

Going by their form and performance against top teams of the world, India will be favourites to win their second consecutive Asian Games title, which they have never achieved in the history of the continental event.

In 15 editions, the only time the Indians returned without a medal from the Asian Games was in Doha in 2006.

Harendra took over the reigns of the senior men’s national team in May this year for a record fourth time, wants his wards to create a legacy by the end of 2018 and, according to him, the Asiad is the first step towards that target.

“We can’t think of anything less than a gold. It is not acceptable. But we have to prove ourselves on the pitch in each and every match,” Harendra said. “A gold here will make us the first team to qualify for the 2020 Olympics and we will get one year and 11 months to prepare ourselves.”

Indian men will next take on Hong Kong China on August 20 followed by matches against Japan (August 24), Korea (August 26) and Sri Lanka (August 28).

Well, we congratulate and them and wish them good luck for the future!

Stay Connected To Laughing Colours For More Such Updates!