Ayushmann Khurrana Keeps It Real For Next, Will Be Playing Pianist In ‘Shoot The Piano Player’ 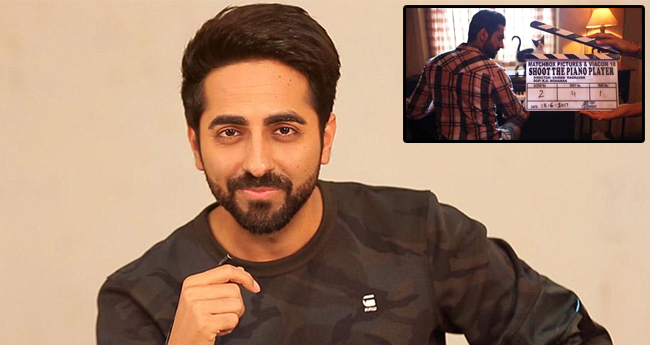 Ayushmann Khurrana, the finest actor, and a singer have impressed us with his outstanding performance in films like Bareilly Ki Barfi and Shubh Mangal Saavdhan.

Well, he is ready to hit the theatre again with the Dangal actress Sanya Malhotra in ‘Badhaai Ho’. The shooting of the film has finished and he is headed towards his next project.

Kya pada hai aisa wahan jisey main taad raha hoon? Or may be it’s just the left profile which works pretty well when you’re eating like a maniac. 94.6 percent of the actors I know prefer the left profile. Why and how 94.6 percent? I don’t know. It is not even random sampling. Decimals just look credible bc. Raat ke 2.15 baje dimaag pe zyaada zor diya toh neend nahi aayegi. Simple sa sawaal hai— which profile works better for you? Styled by @ishabhansali

Now, Ayushmann geared up with Sriram Raghavan directorial venture for his next titled as Shoot The Piano Player, which is co-produced by Viacom 18 Motion Pictures and Matchbox Pictures. The film also stars Tabu and Radhika Apte. In this film, we will see him in a role of the visually impaired pianist. However, he has already shot for a portion in Pune and now going to London to shoot the climax of the film.

As we know Ayushmann is working with the director of Badlapur and he shares his experience working with him and said: “Sriram will leave you open with a certain situation in the film — you have to react to it and up your game. Also, for the role, I took piano lessons. Being a musician helped, but learning an instrument from scratch was not easy.”

When he asked to took references from any film’s character, the actor said: “I preferred to meet a real-life visually-impaired pianist. His life is the correct reference. I spent a lot of time with him, studied his body language, the way he reacts to situations, marks himself on the piano and more.”

Ayushmann also shared the first look of his upcoming movie Shoot the Piano Player and wrote: “I missed the match. But started something really exciting. Great day at the office on day 1 in Pune. Sriram Raghavan’s Shoot The Piano Player. #ShootBegins.”

I missed the match. But started something really exciting. Great day at office on day 1 in Pune. Sriram Raghavan's Shoot The Piano Player. #ShootBegins

On the professional front, Ayushmann will also be seen in ‘Tere Bin Laden 3’ directed by Abhishek Sharma.