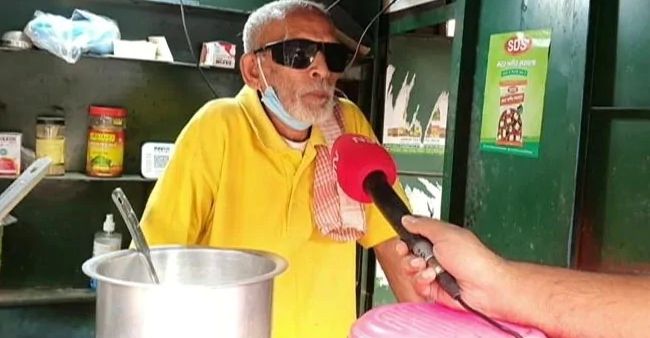 The owner of Baba Ka Dhaba Kanta Prasad who is 80 year old has attempted to suicide on Thursday night, and currently under treatment at Safdarjung hospital.

According to reports, Kanta Parasad’s wife informed that he took an overdose of sleeping pills as he was stressed about his financial situation. Kanta Prasad is in debt right now. His wife said that the rent of the restaurant they opened in New Delhi is Rs 1 lakh and they were earning around Rs 30,000 per month. Kanata Prasad was worried about paying his debts.

Kanta Prasad went on fame last year after a YouTube video by Gaurav Wasan highlighting the miseries of the  couple during COVID lockdown went viral.

Eighty-year-old Kanta Prasad and his wife Badaami Devi came back to the old Dhaba after their restaurant in south Delhi’s Malviya Nagar went  unsuccessful.

According to last year’s success, Prasad has invested around Rs 5 lakh to open the new restaurant and hired three workers. After a period of success, there was seen a huge decreased in the footfall of customers and significantly Prasad had to shut it down. He mentioned that, “The average monthly sales did not even cross up to Rs 40,000, and I have to bear all the losses for which I feel we were wrongly advised to open a new restaurant. On the contrary the total investment was of Rs 5 lakh  and somehow  we managed to recover only ₹36,000 from the sale of chairs, utensils, and cooking machines, after the restaurant shut down.”

A few days ago, an Instagram video which  had gone viral, Prasad with folded hands had said that Gaurav Wasan is not a thief and  he never claimed that he was one. Prasad mentioned that he was wrong to say hateful things about him, He also said, “I made a mistake on saying that  ‘I didn’t call him but he approached us by himself, and I’d like to apologise.”

Cops failed to Answer Raj Kundra’s arrest which got delayed by 4 months...