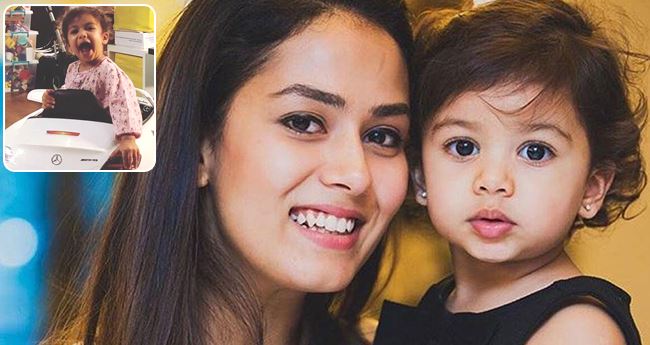 The little munchkin of Shahid Kapoor has been our love ever since she was born. Her mother Mira Rajput Kapoor keeps sharing her super adorable pictures with the social media users and leave everybody awe-struck. Yesterday, Mira shared two pictures of baby Misha where she was seen riding her mini ‘Mercedes Benz’ and making some really cute expressions while getting clicked.

The picture is from the playroom which Shahid and Mira have created for Misha and their second child which they are expecting.

Sharing the picture, Mira wrote in the caption, “I wonder where she gets it from.. ignore the mess cause that’s from before our playroom cleaning -> @shahidkapoor ahem ahem”

Mira is currently pregnant with their second child. The couple announced the good news with the fans by posting a picture of Misha and writing ‘Big Sister’ alongside.

Mira is often spotted dining out with friends or going for a coffee. Recently, she was spotted flaunting her baby bump in blue denim as she was out to meet her friend for coffee in Bandra.

Yesterday, she shared some cute Instagram stories staring herself and her sleeping husband Shahid. We saw Shahid sleeping with a pillow, so Mira wrote, “Sleeping with my pillow. The snuggle is real.” In another story, she wrote, “Ya…so should I move or let him sleep.” Meanwhile, Shahid Kapoor is currently busy shooting his upcoming film ‘Batti Gul Meter Chaalu’ which also stars Shraddha Kapoor. The film is expected to release on 31 August 2018. Shahid was last seen in Sanjay Leela Bhansali’s ‘Padmaavat’ which also starred Ranveer Singh and Deepika Padukone. the film was a hit on the box office.