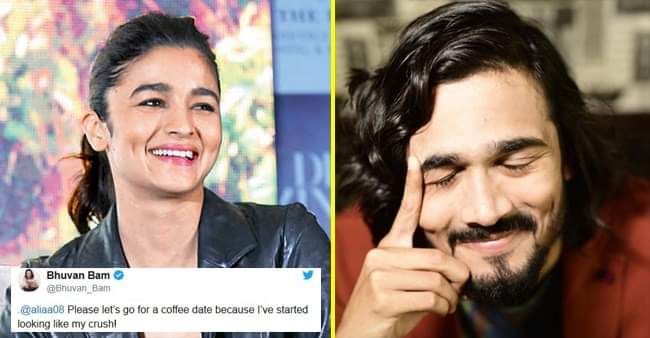 Many Bollywood stars like Shah Rukh Khan, Salman Khan and Abhishek Bachchan have their lookalikes and even their fans adore them as they do to their stars. Be it as it may, the doppelgangers are generally of the same gender, but their’s something different in the case of Alia Bhatt. As, we have quite recently got our hands via social media post asserting that Bollywood entertainer Alia Bhatt looks like well-known YouTuber Bhuvan Bam.

Yes, guys!.you read that right. It might sound hilarious yet there are individuals who have discovered numerous similarities between the two stars. A social media user recently called Bhuvan Bam’s photograph a bearded Alia Bhatt.

The well-known Youtuber Bhuvan Bam has recently shared an image of himself that shows him smiling with his eyes closed. In his subtitle, he stated, “@aliaa08 Please we should go for a coffee date since I’ve begun resembling my crush,” he included, “It would be ideal if you RT the photograph tweet with the goal that it reaches her. Get it going twitter!” ROFL!

.⁦@aliaa08⁩ Please let’s go for a coffee date because I’ve started looking like my crush! pic.twitter.com/DFBDrEZM0v

And this has made the internet crazy,  the netizens have flooded the internet with hilarious memes that you tickle your funny bones for sure. The internet has started a meme fest on social media and some of them additionally took the Kabir Singh reference, but with Ranbir Kapoor’s face rather than Shahid Kapoor.

On the work front, Alia Bhatt will next be seen with beau Ranbir Kapoor in Ayan Mukerji’s Brahmastra which will be released by 2020. The actress is also going for her next film Gangubai Kathiawadi. The movie is by Sanjay Leela Bhansali and will get released by September 2020.