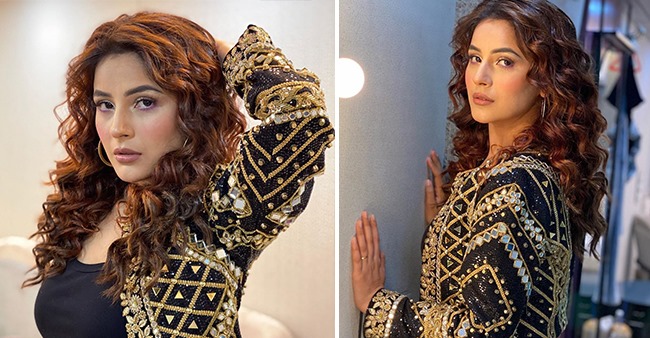 Bigg Boss 13’s most popular contender Shehnaz Gill earned named and fame through the reality show. She was the highlight of the house from the very start till the end. After getting famous in Bigg Boss 13, Shehnaz aka ‘Punjab Ki Katrina Kaif’ became a huge name not only in her hometown Punjab but all over the country.

Now, she enjoys a huge fan following all over social platforms. Her fans love to follow the singer’s each and every move. The Punjabi beauty shared some pictures on her Insta handle and the pics seem to be from one of her new shows.

In the pics, she can be seen putting on shining black pants, a t-shirt and an embellished jacket. She matched her overall look with black boots and curly hair. In simple words, she looked amazing in the images. She captioned the images as “Punjab di main kudi sardarni . @colorstv #staytuned #coming soon (sic)”

As per reports, Sana will be witnessed performing in a new show titled ‘Shaandaar Ravivaar’ that aims at rejoicing festivals. The reports added that the show will be hosted by the couple Bharti Singh and Haarsh Limbachiyaa. The report hinted that Aditya Narayan and Sayantani Ghosh also filmed some sequences for their performance.

Shehnaz shed around 12 kgs of weight in the last few months. While sharing about it, she stated: “Trust me, I went in for a simple reduction in my eating habits. You can say that I cut off on my non-vegetarian food, chocolates and ice cream, and nothing else. But besides that, let me explain how I ate because therein lies the catch. Every day, I ate just one or two things. I wouldn’t stuff too much variety in my daily consumption of food. For example, if I ate dal and moong for lunch, I would eat the same for dinner. And I reduced the portions. If I was hungry for two rotis, I ate only one. Mann maarke khati thi. And it started working. I was 67 kg around the time lockdown began in March, I am 55 kg now.”

Shehnaz added up that she shed 12 kg in around 6 months, but without following any workout routine. Her restrictions to food intake did wonders for the Punjabi beauty.