BB14 Precap: Freshers to eliminate one among Shehzad, Abhinav & Jaan; Seniors to play a new ‘game’ 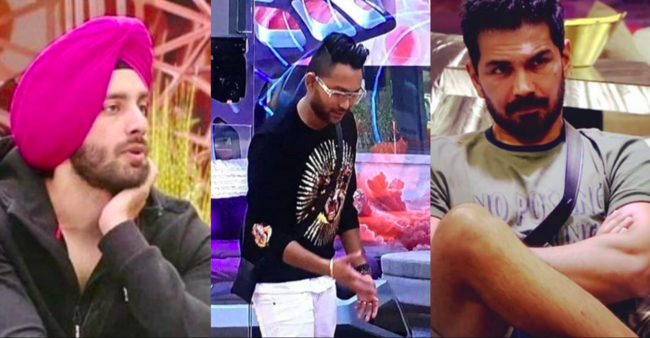 Bigg Boss 14’s Weekend Ka Vaar episode begins with a stunning entry of host Salman Khan. Bigg Boss announced a task in which contestants need to decide who is the ‘dumbest’ among Rubina and Nikki. But, Rubina decided to opt-out from the task as she felt that it’s very disrespectful.

Salman Khan lashes out at Rubina and tells her that you have problems with Bigg Boss rules. Rubina tried to explain her point to Salman but the host tells Rubina that no one insulted you. Salman told Rubina that if she can’t follow rules, she can leave the house right now. Host rejects all Rubina’s claims and in the end, Rubina agreed to do the task with Nikki.

On the other hand, Salman schools Jaan Kumar Sanu and Shehzad over not participating actively in tasks and overall discussion. Jaan Kumar Sanu gets backlash from Salman for only listening to Nikki and not playing his game individually. In the upcoming episode, freshers to decide the elimination. Shehzad, Abhinav and Jaan are nominated for the eviction.

In tomorrow’s episode, we will see the eviction task in which all the freshers will decide who will go out of the house. In the promo, we see Jaan, Shehzad and Abhinav standing behind three props and all other contestants will spray on the faces of nominated participates to vote them out.

Another very boring kind of weekend ka vaar Not good part Rubina was talking for at least 15 minutes which was of no use Sid was not questioned regarding his decisions Nikki was not told how bad she is been looking because of her behavior Gauhar was not praised for her efforts and her fairness I don't like Sid’s facial expression when sk praised either jasmine or Rubina… Which was so insulting …it kind of shows sid personality that he is always right Good part Jasmine was praised for her actions during the week that was thappad on Nikki's face that person also can be seen because of their good personality Nikki was not praised like the was she was expecting Rahul was praised so it was nice to see that only fight was not talked about or mentioned about.. (which was surprising for sid) Was happy that we will not hear Nikki saying “dikh hi nahi rahe ho” I also like Jasmine way to show people their place #sidnaaz #shehnazians #sidheart #shehnaazgill #onlyshehnazians @shehnaazgill @realsidharthshukla #sidharthshukla #sidnazians #vikasgupta #bb13 #bb14 @colorstv #sidhearts BiggBoss14 #BiggBoss2020 #bb13 #bb14 #biggboss14 #BBhouse #bb14house #biggbosshouse #endomolshine #abpaltegascene #coloraturas #voot #vootselect #onlyshehnazians #dharini___world #dharinis___eye #sidnaaz #shehnazians #sidheart #nickitamboli #rubina #nishantsinghmalkani #salmankhan #beinghuman @rubinadilaik @nishantsinghm_official @alygoni #alygoni @nikki_tamboli

All the freshers will be seen giving their justification for nominating one of the contestants. Apart from this, the TBC confirmation process will begin from tomorrow and in which the contestants will be divided into three teams. Sidharth, Gauahar and Hina’s teams will be competing with each other for winning the confirmation tag. Now, the seniors will be playing an interesting game in the house which will be a treat to watch. And yes, tomorrow’s episode will be aired at 10 pm.

Jaan Kumar Sanu’s half-sister Shannon K talks about him, says ‘I am sure he’ll do good in Bigg Boss’...

SidNaaz’s Fans Can’t Keep Calm As Sid Tells Gauahar That He Has A ‘GF’ At Home  ...