After Aishwarya and Aradhya, Sushmita Sen takes daughters to the Disneyland 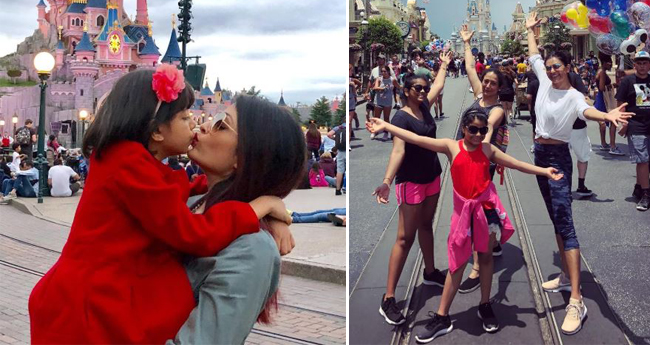 We have often seen Bollywood stars heading off to some exotic locations once they are free from their work. Well, we get to know about their whereabouts through their social media accounts. These actors keep sharing beautiful pics of their holidays on Instagram accounts and fans can’t stop gushing about it.

Aishwarya Rai Bachchan is currently holidaying with her darling daughter Aaradhaya in world’s most beautiful place, especially which every kid dreams about being there.

Aishwarya was recently in Paris for attending an event where her mother also accompanied her. However, after finishing her work commitment, the actress enjoyed the tour of the beautiful city by taking her daughter to Disneyland. The pics of Ash and her daughter are going viral on the social media.

In one of the pics, Aishwarya and Aaradhya had a cute and beautiful moment and show their mother-daughter bond.

A post shared by AishwaryaRaiBachchan (@aishwaryaraibachchan_arb) on Jul 11, 2018 at 3:18am PDT

On the other hand, single mother and Bollywood beauty Sushmita Sen too is having a ball of time with her daughters Renee and Alisa in Disneyland, Orlando. Sushmita took to Instagram to share all the fun they are having there.

😄The world zips me by as I pause to absorb the #magic 💋💃🏻 After all, mine is a #cinderella story where #simplicity #love #hope #hardwork #conviction #faith & #relentlesspatience have led to innumerable #miracles 👏💃🏻❤️ “I promised life never to lose a sense of #wonder & to create #music wherever I go” 😉😁❤️ perks of being God’s #favouritechild ❤️💃🏻😄 ME READY… #bringonthemagic #disneyworld #magickingdom #orlando #holidaydiary2018 #happiness #fairytale ❤️❤️❤️

In one of the pics shared by the actress, she is looking smoking hot in a pink swimsuit along with her daughters.

On the work front, Aishwarya Rai is currently busy with many projects; however, she manages to spend as much time as she can with her daughter by taking her to the trips. Aishwarya will be next seen in Fanney Khan starring Anil Kapoor and Rajkummar Rao. The movie is directed by Rakeysh Omprakash Mehra and is slated for 3rd August release.

The former Miss Universe was last seen in No Problem which released in 2010. It was directed by Anees Bazmee and produced by Anil Kapoor, who also played one of the leads in the film. It was a multi-starrer flick starring actors like Sanjay Dutt, Akshaye Khanna, Sushmita Sen, Paresh Rawal, Kangana Ranaut, Neetu Chandra and Sunil Shetty.

The fans are eagerly waiting for Sush to make a smashing comeback on the big screens soon.