Big Salute To Kargil Braveheart Major Padmapani, Sacrificed His Life and Never Got To See His Daughter 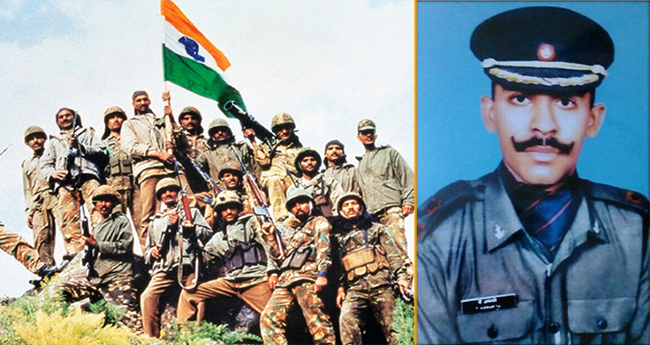 As per reports, Charulatha Acharya’s father-in-law, Jagannath Acharya, an ex-Wing Commander, got a phone call from a representative of the Armed forces, on June 28, 1999, that his son was no more.

“Your son fought bravely. He created history but is no more,” stated the Army spokesperson. At that time, Charulatha was six months pregnant. The shocking news brought gloominess and darkness within the Acharya family.

Charulatha’s spouse, Major Padmapani Acharya, the Company Commander of the 2nd Rajputana Rifles, got posted at Kargil during that time.

Just a week prior to this telephone call, on 21st June, the whole family had commemorated Major Padmapani’s 31st birth anniversary over the phone. While talking to media people, his mom stated, “As a mother, I am definitely sad and hurt, but as a patriot, I am proud of my son. He lives forever, whereas I will not. He made me promise that I would not cry when he left for the front.”

His father added, “You have to accept the inevitable and adjust accordingly. It is tough to digest, but we are all proud of him and miss him.”

Major Padmapani had hit the record, said the call. He had donned a vital role in the battle that the country would move on to triumph a month later, and the truth that he gave his life for the nation was what kept his family going. Major Acharya and his troops had been tasked with the responsibility of capturing Lone Hill and recapturing the Tololing peak in Kargil, both of which were of utmost strategic importance.

“On June 28, 1999, Company Commander Major Padmapani Acharya was assigned the formidable task of capturing an enemy position which was heavily fortified and covered with mines, sweeping machine gun and artillery fire. The success of the battalion and the brigade’s operations hinged on the early capture of this position. But the company’s attack almost faltered at the very beginning, when the enemy’s artillery fire came down squarely on the leading platoon, inflicting a large number of casualties,” writes SS Gandhi in his book, ‘Portraits of Valour.’

However, the brave head knew precisely what had to be exercised, and acknowledged that his own life or even that of his squad would be a small price to back the country all together.

As per Acharya’s previous conversations with his dad, “Dear Papa… don’t worry about casualties- it’s a professional hazard beyond our control. At least it is for a good cause. Tell mamma that combat is an honour of a lifetime and I could not think of anything less.”