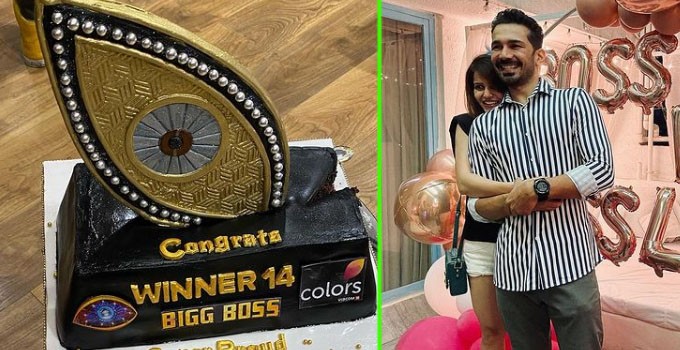 Published by siddhi ajgoankar on 23 Feb 2021

On February 21, 2021, the fourteenth season of the TV reality show Bigg Boss came to an end. Contestant Rubina Dilaik lifted the shinning winner’s trophy and her fans rejoiced. Various social media platforms flooded with congratulatory messages for Rubina for achieving this amazing feat.

After winning the title, Rubina Dilaik returned home after staying in the Bigg Boss house for over 140 days. She received a warm welcome from her husband Abhinav Shukla, her friends and industry colleagues, and her family member upon her return.

Taking to his Instagram handle, television actor Abhinav Shukla shared a picture of his wife alongside the caption, “My Winner.”

In the picture, we can see Rubina posing next to a giant poster that reads, “Welcome home boss lady.” Abhinav went on to share one more mushy picture with his wife and wrote, “Celebrations along with a lot of gratitude to the fans and public who supported us and showered so much love.”

Rubina’s husband, Abhinav Shukla was also a contestant in the 14th season of Bigg Boss. However, he was evicted from the house a week before the grand finale.

The Bigg Boss 14 winner shared a video from her home and wrote, “Nothing like home sweet home …Love.” Rubina also shared a series of pictures with her husband Abhinav and a few friends. She shared the pictures with the caption, “Celebrations with my people.”

In the picture, we can see Indian television stars Surveen Chawla, Srishty Rode, Sharad, and Keerti Kelkar, among others who were part of Rubina’s homecoming celebrations.

Speaking of the Bigg Boss 14 finale, in the Salman Khan-hosted show, Rahul Vaidya emerged as the 1st runner up and Nikki Tamboli as the 2nd runner up.

Rubina Dilaik also won a cash prize of Rs 36 lakh alongside the shiny Bigg Boss 14 trophy. There is no doubt that she has garnered a lot of fan following due to her stint in the show.