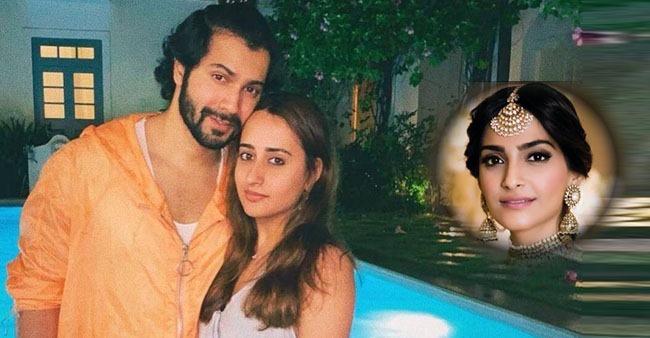 The rumour has it that childhood sweethearts- Varun Dhawan and Natasha Dalal are all set to tie the knot. The lovebirds will allegedly be getting hitched on Sunday, January 24, 2021. Only a few close friends and family members will be attending the Holy matrimony due to lockdown restrictions. Varun and Natasha will reportedly get married on private property in Alibaug.

Meanwhile, the reports suggest that Varun Dhawan’s childhood friend, Sonam Kapoor won’t be able to attend his wedding ceremony. All the pre-wedding functions are soon going to kick-start but the actress is going to remain absent for the same.

The reason behind Sonam Kapoor not attending her close friend Varun Dhawan’s wedding is that she is bound by work commitments. The fashionista of Bollywood is currently in Glasgow, United Kingdom. Over there she is working on her upcoming venture titled Blind.

As Sonam is busy preparing for her role in the movie, she won’t be able to make it to Varun and Natasha’s rumoured wedding. Even if she returns to India for this special occasion, it would be mandatory for her to follow quarantine measures due to the worldwide health crisis.

However, Sonam Kapoor’s father, actor Anil Kapoor and her siblings- Rhea Kapoor and Harsh Varrdhan Kapoor will be present at Varun and Natasha’s wedding ceremony.

On the work front, Varun Dhawan will be sharing the screen space with Anil Kapoor in an upcoming movie titled Jug Jug Jeeyo. In the movie, the latter will reportedly play the role of Varun’s father.

The release date of Jug Jug Jeeyo is yet to be announced by the makers. The film will be a romantic-comedy entertainer. The shooting of the same is underway in Chandigarh.

Published by siddhi ajgoankar on 20 Jan 2021