Boyfriend went on to hunger strike when ignored by girlfriend, also convinced her to get marry to him

Hunger Strike seems to have become a popular way to raise your voice against something and to express your opinion. People sit on dharnas and bhukh hadtal to make their message to reache to a large section of people.

But It is rarely heard of dharna and fast for getting back your loved one. Though, it recently happened  in West Bengal.

A boy named Ananta Burman was in a relationship with a girl named Lipika for the last eight years. But unexpectedly, Lipika stopped communicating with Ananta, and blocked him from WhatsApp, phone and other social media sites.  Ananta did some digging and found out that Lipika’s family was looking to get her married somewhere else. Without wasting time, Ananta thought of an idea to get back his love. Ananta started a dharna outside her home just when the prospective groom was about to visit Lipika’s home.

He had a placard with him that read ‘Give back my eight years’. Some people even came out in support of Ananta. At the same time, the family of the guy also arrived at the spot and not just the family members, police also arrived at the location. But as they say, if you are in love you tend to cross boundaries and even the police couldn’t stop Ananta from breaking his fast, or moving from his place of hunger strike or dharna. 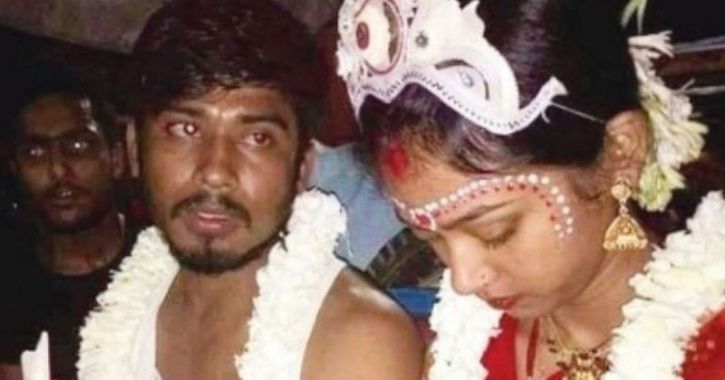 As the went time on, Ananta’s health got worst and he was rushed to the hospital. Looking at all of this, Lipika finally agreed to get married to Ananta and after intervention from locals, her family also came around and agreed for the marriage proposal.

Ananta and Lipika got married almost immediately and went to a local mandir to complete all rituals. The phrase – Pyar Kiya To Dharna Kya!, has been proved here.

#Gurugram Woman threatens to jump off roof after company sacks her pic.twitter.com/WLY8BgAdfc

Though, it is not so in this case but there are people who extort their partner to get married or to be even  in a relationship. More often than not, the situation turns askew very quickly. And obviously, it is not the healthiest way to deal with a sensitive thing like a relationship.

Father get his daughter’s footprints on his new truck before starting a new business; Heartwarming video goes viral...

Salman Khan gets bitten by snake at his Panvel farmhouse, condition stable...