Brazilian Super-Mom Katia Sastre Saved Many Lives With Her Cleverness 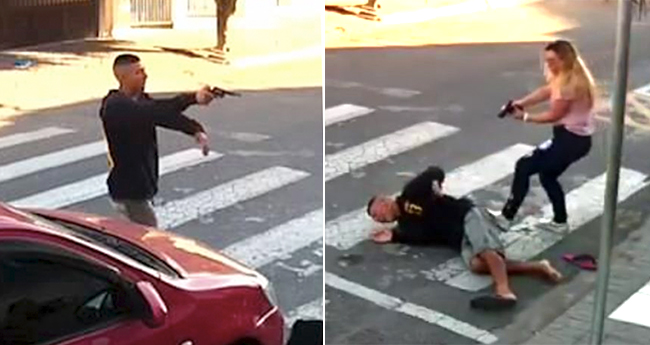 Being a mom is the trickiest job in the world. Moms look after their kids, home works as well as their jobs. And once they fulfilled all these tasks, they get some time to care for themselves. But, in a few exceptional cases, even those times of spare time turned tough. Then what should be done? Well, for beginners, you can learn some special points from a Brazilian mom who bravely turned up against a shooter.

As per the reports, the woman named Katia Sastre was having a break and was going to become a part of a Mother’s Day gathering with her 7-year-old kid. But, things turned serious as she along with a group of moms and kids got confronted by a gun-toting robber. Her companion told the story saying, “The first shot ricocheted off something. on his second attempt to fire, his weapon jammed. Thankfully she was faster than he was, because when a thug discovers he’s being confronted by a police officer, he shoots to kill.”

The whole confrontation between the shooter and the Brazilian policeman got recorded on the school’s CCTV. It’s upsetting to look out the hooligan move toward this group of apparently powerless families, whilst others run for protection. Luckily, Katia was there to assist all and take down the shooter in just a few seconds, thus saving a number of lives.

News of the woman’s courageousness shortly spread all over São Paulo as the recording turned viral all over the web. The Governor congratulated her and gave his thoughts on the whole event.

“It is not ideal that the suspect died. We would have preferred this had not happened. But it is a warning to those who take up a gun that they could be killed because our security professionals are well trained to protect the public.”

Even though Eliventon Neves Moreira was taken to the hospital after his detention, he didn’t stay alive. But, if it wasn’t for Sastre’s peaceful conduct and alertness, we would be reading the demises of guiltless people, in place of the one who’s blameworthy.

Priyanka and Nick thank all as their fundraiser for sufferer collects 2 crores 50 lakhs in single day...