Breaking: BJP’s Yeddyurappa Will Take Oath As The Chief Minister of Karnataka Tomorrow 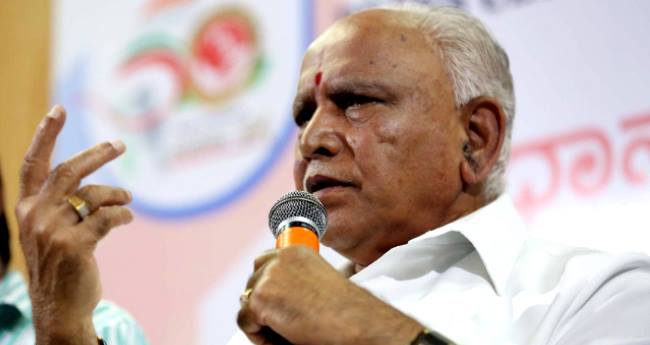 The Karnataka Assembly race 2018 has cleared for BJP now after JDS and Congress are not joining hands for party alliance.

Votes have been counted for the Karnataka Legislative Assembly elections 2018 and as per the results BJP has emerged as the party with the majority to form the government. There was 72.13 percent voting has done on May 12 in 222 seats out of 224-member assembly total. To establish a majority any party needed 112 seats. Whereas BJP alone leading with 104 seats while Congress has won 78 and JDS 38. BJP needs 8 more seats to establish its majority in the state. So the Congress has raised the majority figure by supporting JDS. According to sources, BJP’s Chief Minister candidate Yeddyurappa attended the legislative party meeting at 10.30 am this morning, where he was elected as the leader of the party and sources said Yeddyurappa will take oath as the Chief Minister of Karnataka tomorrow.

After meeting the Governor Vajubhai Vala, Yeddyurappa had claimed to form the government. However, Vajubhai Bhawani, then he is a member of the Rashtriya Swayamsevak Sangh. Apart from this, he was also the President of the Gujarat Assembly from 2012 to 2014. JDS State President HD Kumaraswamy offered by Congress to be the Chief Minister. However, BJP’s CM candidate BS Yeddyurappa has won from Shikarpura seat with 35,397 votes while Siddaramaiah has lost from Chamundeswari seat and has won from Badami seat.