Check out how Suzanne Bernert looks as Sonia Gandhi; her Hindi skills and acting 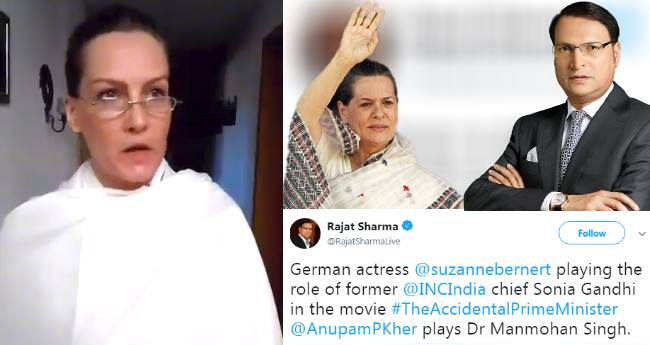 As per latest reports, a movie on the ex-Indian PM, Dr. Manmohan Singh is on the cards. Ace personality Anupam Kher will be seen playing the character of Dr. Manmohan Singh in the film. The movie also features Akshaye Khanna who will take up the role of a political forecaster.

Aahana Kumra will be seen donning the role of Priyanka Gandhi. At the present time, the filmmakers are busy shooting their big project. The makers of the flick recently finished their schedule in the city of London. Beforehand, the reports also stated that German beauty Suzanne Bernert has been chosen to don the character of Sonia Gandhi. For anyone who had qualms about Suzanne Bernert’s acting expertise and aptitude to converse Hindi, there’s a video recording turning viral all over the web, which showcases the actress putting on a white saree like Sonia, and mimicking what could probably be a dialogue from the screenplay.

Suzanne has already worked in several Indian movies and TV serials. She also becomes the first foreign performer to don the role of a baddie on Indian television in a popular show named Chakravartin Ashoka Samrat.

This won’t be the actress’s initial time in donning the character of ex-Congress supremo. In a television show named Pradhanmantri, she had also played the role of Sonia.

The flick named Accidental Prime Minister is completely based on a memoir penned by Dr. Manmohan Singh’s media consultant Sanjay Baru and reached markets in the year 2014. The movie is based on the life of Dr. Manmohan, who turned out to be a political head and acted as Indian PM from the year 2004 to 2014 under the United Progressive Alliance. At the awards ceremonial occasion, Anupam Kher bagged a special tribute for his input to Indian theatre and cinema. In his speech, he said, “I have come straight here only to receive this award from England after completing my shooting (schedule) for The Accidental Prime Minister. I am really honored and fortunate to receive this award. I have studied the character of Manmohan Singh for four months and it is the most difficult role that I have done. I hope the audience will see his journey on-screen really soon.”

Helmed by Vijay Gutte, the story of The Accidental Prime Minister is penned by Hansal Mehta. The movie will hit theaters on December 21, 2017.