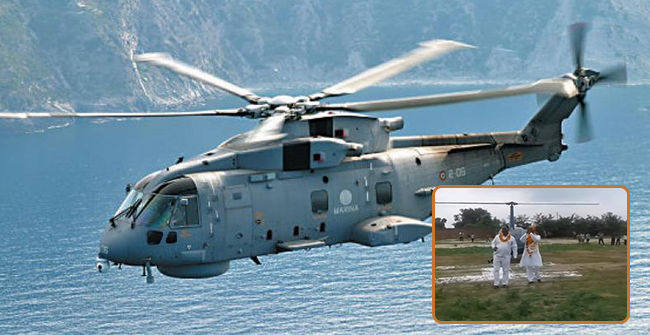 As per latest reports, a 60 year old class IV employee who just retired from a Government Senior Secondary School, rode home to Faridabad’s Sadpura in a chopper. The lucky teacher was none other than Kure Ram, who retired after 40 years of service at a Government Senior Secondary School. After the retirement day, he arrived home in a temporary landing patch along with his family. The chopper started from the school where he had worked in Neemka and the school is 2 km away his village Sadpura.

Kure Ram’s younger brother, Shiv Kumar is the sarpanch of Sadpura village and he said that before his retirement day, Ram had told that he wanted to celebrate the occasion of his retirement in an entirely different way.

Kure Ram had a dream of riding in a chopper along with his family. He wanted to travel through the routes through which he went to work. In the initial years of his services, he used to reach the school by foot. After some time, he bought a bicycle for his travel and ultimately he got a motor cycle and started riding it on his way to the school.

The copter trip cost around Rs 3.30 lakh and the amount was arranged by the family members of Kure Ram. The copter had to make eight trips so as to bring the entire family to the village from the school. Kure Ram’s brother said that they were not a rich family and do not have any agricultural land of their own. But this didn’t mean that they could not live their life. The entire family got together and started working towards fulfilling the wish of Kure Ram.

It seems that it is the first time that a normal Government employee in India is celebrating his retirement in such a unique way.