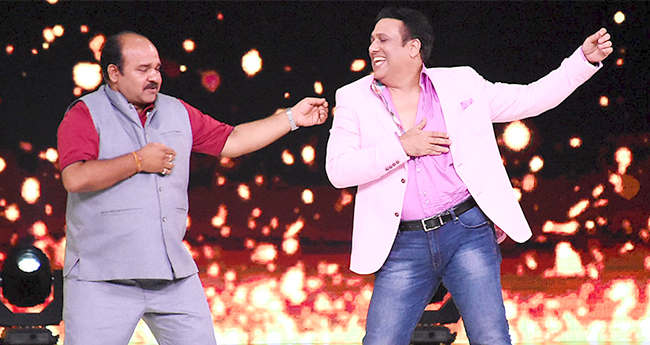 Sanjeev Shrivastava also known as the ‘Dancing Uncle’ who got overnight fame with his dance video on song ‘Aapke aa jane se’ is no doubt in the best phase of his life. After receiving appreciation from many celebrities and politicians he got a chance to meet ‘Govinda’ himself on the sets of a dance show. Sanjeev who is a big fan of Govinda became popular by copying his dance moves.

As Dancing Uncle is trending on social media he is being approached by many Television channels. He along with Govinda set the stage on fire with their dance moves on Madhuri Dixit’s reality show. Chichi said “More than half a dozen heroes have copied my steps, and nobody has done it so well!”

In a recent interview when asked about ‘Dancing uncle’ Govinda also said that his dance looks alive and thanked him for copying the dance style this good and wished him good luck for his future life. Having received much appreciation by politicians and celebrities Sanjeev is also appointed as brand ambassador of municipal corporation in Vidisha. He has also bagged a TV commercial.

Dancing uncle also thanked Govinda for his valuable comments “It’s my fortune that Govinda ji saw my video and said such precious words. I don’t think I want anything else after hearing this.”

This internet sensation also got a chance to appear with Salman Khan in ’10 Ka Dum 3′ on the small screen.

Sanjeev, professionally is an electronics professor in Bhabha Engineering Research Institute in Bhopal, Madhya Pradesh. A video made him popular on internet where he danced with his wife in a wedding function copying Govinda’s killer dance moves. The chief minister of Madhya Pradesh ‘Shivraj Singh Chouhan’ also appreciated him and tweeted saying “Believe it or not, there is something special in the water of Madhya Pradesh…”