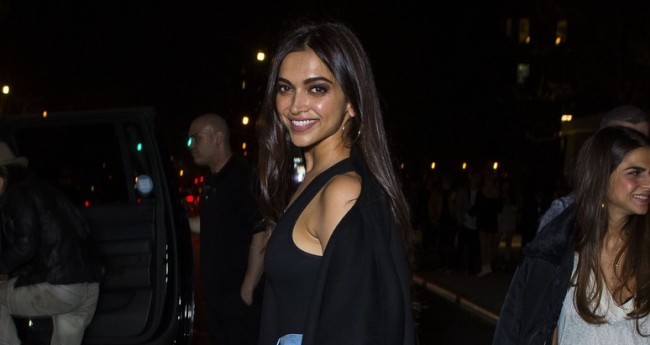 The Padmaavat actress Deepika Padukone was slaying and made everyone to gaze at her in the Pre-Met Gala bash. Deepika is in NYC these days. She looked stunning and carried a chic look like a pro. The dimpled beauty wore a black tank top and paired it with a high-waisted flared jeans and an overcoat. She attended Harry Josh Pro Tools’ 5th anniversary. She was seen partying with Hollywood celebrity Rita Ora. Pictures of Deepika from the party night are going viral on the social media. Not only with celebrities, she happily clicked pictures with her fans too. Harry Josh is a famous hairstylist. He has been organizing the pre-Met Gala party since 2005. Hollywood celebrities- Teyana Taylot, writer and TV personality Janet Mock and entertainer Lizzo also attended the party. The Quantico actress Priyanka Chopra didn’t attend the Pre-Met Gala bash. It is yet to be seen whether she attends the event this year or not. Her outfit became topic of discussion last year.

Deepika Padukone at pre-Met Gala posed for the paparazzi-

DP is all set to attend the Met Gala in NYC. Its the second time that she is going to attend the Met Gala. Deepika is emerging as an international artist and can be once again seen in the sequel of Xxx-Return of Xander cage with Vin Diesel. Everyone’s waiting to know what is she going to wear this year. After attending Met Gala, Deepika will be going to Cannes for the film festival and endorsing the brands she represents. There are also chances of Priyanka and Deepika attending the event together which can be a great news for their fans. Both the ladies are making India proud as they are breaking the stereotypes and representing the country on a global platform.