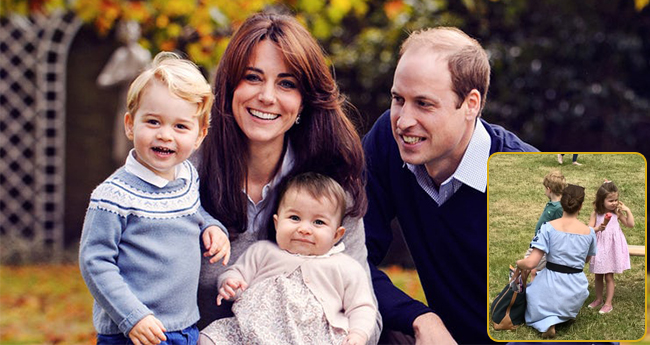 Recently, the marriage of younger prince of the British royal family brought them in news. At the wedding of Prince Harry and Megha Markle another royal family member got noticed. It was none other than the wife of Prince William and Duchess of Cambridge ‘Kate Middleton’. As everyone knows she belonged from a non-royal family before her marriage the lady never fails to win hearts of the fans. She was spotted repeating an old outfit at the royal wedding. Now Kate is in news for wearing a Zara outfit which costs very less.

Everyone expects for a member of the royal family to wear highly expensive clothes. But this time the Duchess Of Cambridge surprised fans by wearing a blue sundress that costs around Rs 3600 (39.99 Pounds). She complemented the look by wearing leaf gold drop earrings and carrying a tote bag which costs around Rs 9,600.

Prince William along with wife and children were captured spending time at Houghton Horse Trials. Princess Charlotte looked extremely adorable in a pink dress whereas Prince George wore beige shorts paired with a green t-shirt. Take a look at the family pictures from Norfolk.

Kate Middleton has recently given birth to Prince Louis. Her outfit from Zara was sold within hours as the fans rushed to the store when they came to know about her dress. Her styling and fashion sense are very impactful in America and is also referred as the ‘Kate Middleton Effect’ by media. She is entitled with style “Her Royal Highness The Duchess Of Cambridge”.

Bitcoin plunges 17% after Musk tweet that Bitcoins wont be accepted as payment at Tesla...

Madhya Pradesh government: Free education and Rs5,000 pension for children who lost their parents due to COVID...

The first Blood moon eclipse of this year to occur on 26th May: Learn about this year’s eclipses...