India’s GDP growth rate during Dr. Manmohan Singh was 10.7% while 7.3% under PM Modi 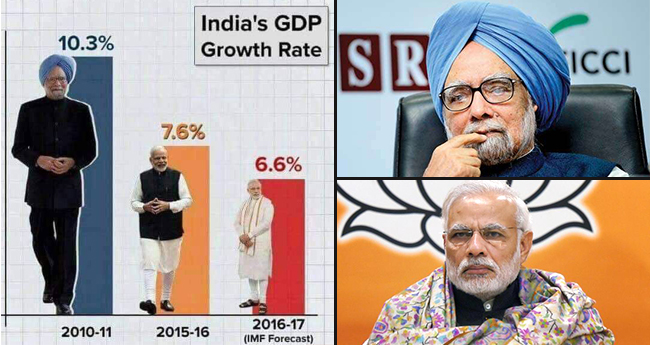 In the governance of BJP’s PM Narendra Modi, citizens are distantly having his Achhe Din and we are still hoping for it to come soon. Everyone is waiting for Achhe Din and Vikas from the day BJP came into action and now here came the reports which are highly disappointing.

According to back series calculations by a committee appointed by the National Statistical Commission, India’s economy was higher under the former Prime Minister Dr. Manmohan Singh during the UPA government (United Progressive Alliance). It was 10.23% in 2007-08 and 10.78% in 2010-11.

"History will be kinder to me than the media" – Dr Manmohan Singh #DrSinghGDPking pic.twitter.com/0Z1oTqMhKi

A Central Statistics Office spokesperson, however, said these are “indicative and experimental numbers” and the final figures based on sectoral data will be calculated in a month’s time.

DK Joshi, chief economist at Crisil Ltd.said, “it is interesting to compare aggregate GDP growth, it is equally important to look at what caused it and whether it was supported by sustainable fiscal/monetary policies”.

The highest ever growth rate since the Independence was stated at 10.2% in 1988-89 when Rajiv Gandhi was Prime Minister. The report has been released on the website of the Ministry of Statistics and Programme Implementation (MOSPI) and it is prepared by the Committee on Real Sector Statistics, integrated by the National Statistical Commission. The reports compare the growth between old series (2004-05) and new series based on 2011-12 prices of the domestic products.

“The GDP back series data is finally out. It proves that like-for-like, the economy under both UPA terms (10-year avg: 8.1%) outperformed the Modi Govt (Avg 7.3%), the Congress party said in a tweet.

The GDP backseries data is finally out.
It proves that like-for-like, the economy under BOTH UPA terms (10 year avg: 8.1%) outperformed the Modi Govt (Avg 7.3%) .

It also suggested that the UPA is the only government who double the digit of annual growth in modern Indian history.

Post the release of this report of a comparison of growth rates, netizens are quick to respond on the same. Here’s what they are saying including some official’s tweets:

GDP under MMS Vs GDP under Gobhi Ji #DrSinghGDPking pic.twitter.com/Gr5mudBq28

No Vikas. No Achhe Din.

Only hardships for the common people since the last 4 years #DrSinghGDPking pic.twitter.com/dYRLEidgfQ

He didn't thump his chest at every opportunity.

He didn't fool the people of India with constant lies.

He silently worked with diligence to give India a 10% GDP economy.

Even at the time of economic crisis, former PM Singh ensured that the economy remains constant.

The UPA also had the disadvantage of a global economic crisis. Yet Dr. Singh ensured that our economy remain at a constant high. #DrSinghGDPking

What are your thoughts on the same, tell us in the comment section?