Ekta Kapoor gets candid about VDW, Naagin 3 and her nephew Laksshya 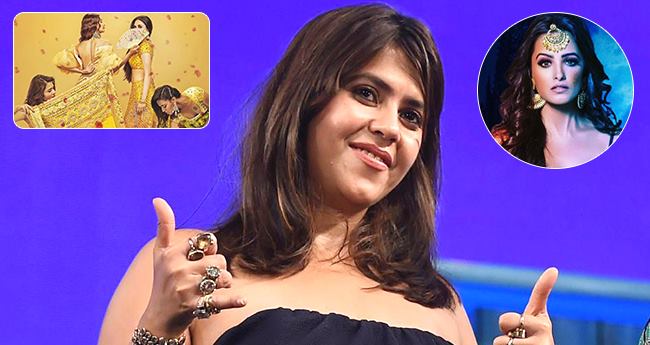 Ekta Kapoor doesn’t need an introduction and media house went to meet her she was in the middle of something as its seem by her dressing- wearing casually in a green kurta with her hair in a knot. Now Ekta has many projects going on altogether like film Veere Di Wedding, three TV shows, and numerous web series.

And the conversation starts with her first venture with Kareena Kapoor Khan, Sonam Kapoor and Rhea Kapoor- Veere Di Wedding.

Ahead in the interview, you’ll get to know that how much she believes in the thought of acceptance for women however they are!

Here are some excerpts from the interview:

When asked “With Veere Di Wedding, Naagin 3, Qayamat Ki Raat and Dil Hi Toh Hai on the stake, what is your state of mind?”

She said, “I am going mad. Well, I have been doing my own thing as multi-tasking is a big word. I have great teams working with me. I am too numb and tired now. I take out time selfishly for my workouts. The thing is I cannot just say no to good work. I am happily doing whatever is coming my way”.

What was your first reaction when Rhea (Kapoor) came to you with the script?

Revealing she said, “I was like Rhea you have this story about four gorgeous women whose lives I cannot definitely identify with. I mean, it has Kareena Kapoor Khan signed on as Kalindi. When I read the story, I was like, this is gorgeous Rhea! It has beauty with depth. Any girl/women from any part of the world would relate to the film and issues. In Veere Di Wedding, nor is Kalindi perfect nor Avni. Girls will see them and say it’s me!”

When asked about her closest character from the film VDW she answered very truthfully that she like Swara’s character (Sakshi) the most as Ekta have temper issues just like Swara’s. “She is the most foul-mouthed and dysfunctional in the movie. After I saw the film, I called her up and said, “Swara, you’re very funny like me only”. She asked me, “Main kya ameer nahi lag rahi hoon film main“. I started laughing and said, “No, you look rich, of course”.

Tell us a bit about the tagline that Veere Di Wedding is not a chick flick?
It is basically our whole gender gets pushed to one side when we make a film about women. Men can make comedies, romances, bromances, western but women makers can only make a chick flick. It is like what else can they do? Women writers will show four girls sitting around and gossiping. That’s a film for them.

The media was watching #veeradiwedding n I was editing #naagin3 !!! Here it’s comes this weekend!!! #Repost @balajitelefilmslimited with @get_repost ・・・ Excitement to the countdown #Repost @colorstv with @get_repost ・・・ Only three days to go for the drama and thrill, to begin with, #Naagin3! Our excitement level is a soaring 100+. What about you guys? @karishmaktanna @anitahassanandani @surbhijyoti @ektaravikapoor @chloejferns @muktadhond

About the content era is platform neutral with ALT Balaji, she said, “The audiences are shifting platforms. Young people are lesser on TV and more on the net. If someone wants to watch digital content, he or she watches it alone. On the other hand, film viewing is a more communal experience where you go with family or friends. Television is again for the whole family. There are habitual preferences when it comes to content”.

She also said which is truly the right thing I guess, People watching TV is shrinking in cities but expanding in villages. So, content is more about them. We are a country of one billion. No medium is going to die. It does not bother me. I am happy with the growth in digital content as I now own an app (laughs).

When Ekta was asked about the rumours that are going on about her show Naagin 3 which is inspired by Jaani Dushman – Ek Anokhi Kahaani? She revealed, “We have a very easy way here. It is particularly prevalent in India that the story must be that. It is the story of vendetta. It is about a girl taking revenge from five men who tried to rape her. So, it can be a bit of #MeToo also. It busts the thought that a woman will never get back. It is vendetta done differently”.

Rakshanda Khan said that you are a puppy in front of Laksshya. How has your life changed with the arrival of your nephew?
Again, I got late as he refused to let me leave the house. It is scary. I never believed I could love a child so much. People would show me videos of their toddlers saying hello and I would wonder what’s so great about it. Now, I have become that person. Whenever someone says Laksshya, I start showing his videos. He had a nightmare recently and I was so stressed. I could not sleep the whole night. I have realised there is no bigger joy than a child in the house. No money, work can bring that smile that a child brings to a home. It is a pure stress-buster to see him roam around the house. My house is not the same as it used to be two years ago. It is a different home.

Tusshar is a disciplinarian. He has told us not to enter his room after eight pm as it’s his bed-time. We are more scared of his dad. He wants to make sure that he has proper timings to sleep and wake up. It’s like do not be like your aunt, she has no timing for anything.

Are you excited about the upcoming movie and web series and other shows of Ekta Kapoor?