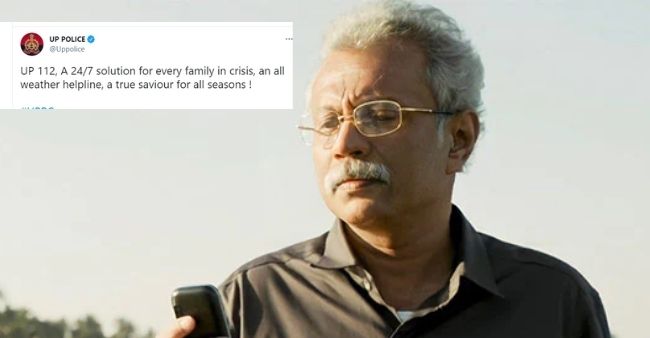 The much-awaited The Family Man 2 is out now. The thriller web-series has a lot of fans from all age groups. Since its release, social media is filled with references of the show, reviews and of course the memes. The actors are enjoying the amazing reactions given by the audience. Jumping in the bandwagon, the Uttar Pradesh police also spun their latest post around one of the characters of the show.

Chellam sir played by Tamil actor Uday Mahesh is one of the characters that left deep impact on the audience within limited screen time. Seeing the massive admiration for Chellam sir, UP police, took to Twitter to share a post about 24×7 helpline number around his character from the show. The police created an collage image with various crimes that they helped to stop over the past years owing to their helpline number of 112. The part which attracted the audience was an image of Chellam sir from a scene in The Family Man in the centre of the collage. The UP police added his image to urge people to rely on their helpline number and use it when needed.

The UP police captioned the post saying, “A dependable help line for every family man…UP 112, A 24×7 solution for every family in crisis, an all weather helpline.” They ended the caption saying, “…a true saviour for all seasons!”

The post got a lot of reactions and shares from not just fans but also the actors like Manoj Bajpayee, and creators of the show, Raj and DK. Manoj commented, “Chellam sir is a rock-star while the creators appreciated UP police’s sense of humour. One of the fans wrote, “Chellam sir is a new google man.”

We love your sense of humour @Uppolice

In just few hours, UP police’s post went viral all over the social media with the netizens going gaga over it. The Family Man 2 released last week on Amazon Prime. The makers have already hinted for next season.

Being a celebrity is a “secondary thing” in such a crisis, says Randeep Hooda...