HBD Hina Khan : Find The Beauty with Brain in Her most Stylish Outfits 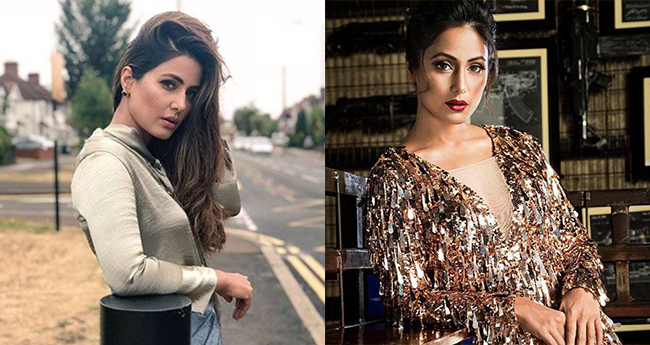 Hina Khan is one of the gorgeous divas in the industry. Hina turns to be a year older today. The Actress who turns 31 today and her birthday wishes have already started in for her from all her well-wishers and fans.

Look,like,buy and flaunt😉 #LondonShopping ..there’s no happy life,there are only happy days! Make the most of it.. Enjoy the little things😇

The actress rose fame by playing the most beautiful character as Akshara, in Yeh Rishta Kya Kehlata Hai. She impressed everyone by playing a  role of an Indian Bahu on the small screen. Later she was seen in reality shows like  Khatron Ke Khiladi and Bigg Boss 11 in a completely new look. She was also the strongest contender of Big Boss 11.

Mirror mirror on the wall😍

In Bigg Boss, she carried not 20 or 40  but as many as 105-night suits with her, one for each day inside the house. Her daily outfits were also different each day. After her appearance in Bigg Boss, she is also gaining popularity among the masses because of her fashion sense. She has an amazing fashion sense and loves experimenting with her looks and makeup. The reality show Bigg Boss completely changed her image from an Indian Bahu to a true fashionista. She has also done a lot of fashion shoots and magazine covers.

Not just the small screen, the actress moved a step forward to a big screen debut with her recent music video with Punjabi singer Sonu Thukral. This video also earned a lot of praises from her fans. Hina will be seen essaying the popular role of Komolika in the season 2 of  Ekta Kapoor’s popular show Kasautii Zindagi  Ki. Her fans have been desperately waiting to see her new style in a unique character.

Each award to me is a special one, as it is a confirmation of something I have done and it motivates me to work even more harder. Thank you WBR Corp for honouring me with the Iconic Achievers Award today in the ‘Most Stylish Personality of the year (TV Entertainment)’ category. #Gratitude Outfit @1717_designerwear @vblitzcommunications Jewellery @curiocottagejewelry

The celebrations have already begun for her by her fans. Her fans are making her birthday even more special for her with handmade gifts and flower bouquets.

It’s always necessary to acknowledge an opportunity. Almost a year back when I had this opportunity i had to face a lot of challenges but looking at each challenge as a new opportunity in itself each time to prove yourself is a true winners attitude, of course it helps you while you’re inside the house but it actually matters when you come out. I did my best when I was inside and continue to do so in my life outside. I wish , hope and pray that everyone from this season of BB become achievers in their respective paths as real winners of real life. Glad and privileged to be present at their starting point in this journey that awaits them both inside and outside the house. @colorstv #BiggBoss12 #SherrKhan . 👗 @prem_thelabel 💍 @minerali_store 👠 @zara Styled by @kansalsunakshi