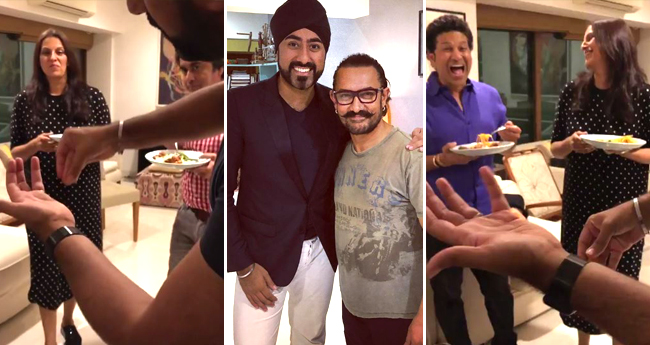 We always see Bollywood stars often indulge in having house parties with their co-stars and other friends. Aamir Khan is often seen chilling out with his Bollywood parties at his house.

The Mr. Perfectionist of Bollywood recently threw a bash for his close friends at his apartment in the city.

The dinner party was quite fun and happening one with guests having a ball of time in each other’s company.

However, there was one guest who left everyone awestruck for what he did. Magician Magic Singh was also invited at the dinner party.

Well, magicians are the ones who can leave us surprised and shocked with their magic tricks. Magic Singh did something same which left everyone just go WOW.

Fatima posted a video of the same on her Instagram handle where Singh showed one of his magic tricks and left everyone amazed.

Take a look at the video here:

We are sure you must be left shocked with Magic Singh’s magic trick and the way he did was mind-blowing.

The artist surely garnered a lot of attention there. He also got himself clicked with the stars. Singh also uploaded the photos with Aamir, Sachin and Varun from the get-together.

An absolute pleasure being hosted by Aamir Khan for a private dinner party. Thank you @avigowariker and @shaziaqg for arranging such a lovely fun evening 🙏🏽❤️ @_aamirkhan #aamirkhan#bollywood#lagaan#jodhaakbar#mumbaimagic

Aamir is a great host and there’s no doubt in this. We are sure the stars must have enjoyed a lot relishing some of the mouth-watering delicacies served at the dinner party.

Such a lovely surprise by Aamir Khan to invite the Legendary @sachintendulkar to watch my private show! Big Love to @avigowariker and @shaziaqg for making this happen:) 🙏🏽💖 @_aamirkhan #sachintendulkar#cricketlegend#mumbaimagic

On the work front, Aamir who was last seen in Dangal and also did a special cameo in Secret Superstar, is currently shooting for Yash Raj Films’ Thugs of Hindostan. The movie also stars Amitabh Bachchan, Fatima Sana Sheikh and Katrina Kaif in the lead roles. The movie is directed by Dhoom 3 fame Vijay Krishna Acharya and is slated for Diwali release.