The main intention of any government schools in the country is to bring more and more students to school and educate them to be well-mannered citizens. But this government school in Vengalampalli in Peapully mandal, Andhra Pradesh not just teaches students, but also non-humans.  Yes!  The school has female langur in attendance other than the regular students.  The langur has been attending the classes since 12 days now along with other students.

Though the incident baffled the students as well as the staff alike, they got adapted to the situation and are accepting the truth now.  The headmaster of the school, S. Abdul Lateef, reportedly said, “The students have also given it a name, Lakshmi.”  He said that it has not created any ruckus on its first day and later settled down to lecturers.  From the very beginning itself, it is a well-behaved monkey, he said.  Lakshmi is like a well behaved, obedient and disciplined student who pays heed to the school rules.  He also reportedly said, “In the morning Lakshmi attends the assembly prayers, then she attends the classes, has lunch with the students, and plays with them after classes.” 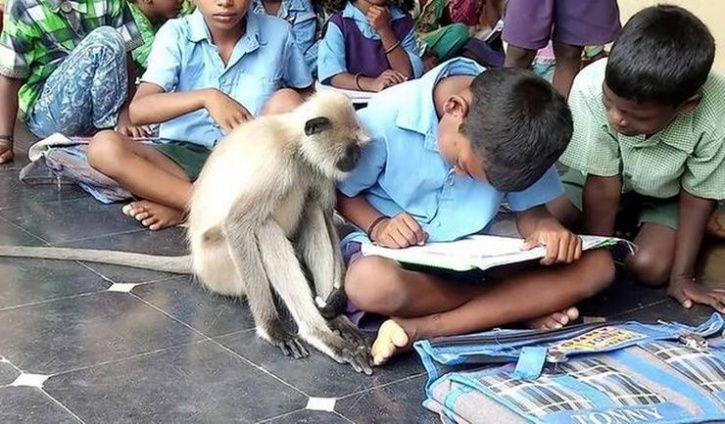 As we can guess, students are getting distracted by Lakshmi as it is not possible to see a langur taking classes every day.  Disturbed by the students distraction, the staff started to close the doors of the classroom while teaching, but however Lakshmi managed to peek through the windows to strictly hear to the lectures of the staff.  The headmaster also said, “The doctor said junk food might have given her an upset stomach.”

But Lakshmi came back to school by Friday as a veterinarian was called to treat it. Now Lakshmi is allowed only to be on a strictly fruits diet. The school staff feeds Lakshmi a dozen bananas daily that they purchase. While the schools and universities around the world are planning to start petting zoos as stress relievers for the students, Lakshmi is helping the students of Vengalampalli school a lot by playing with them and taking lectures with them.