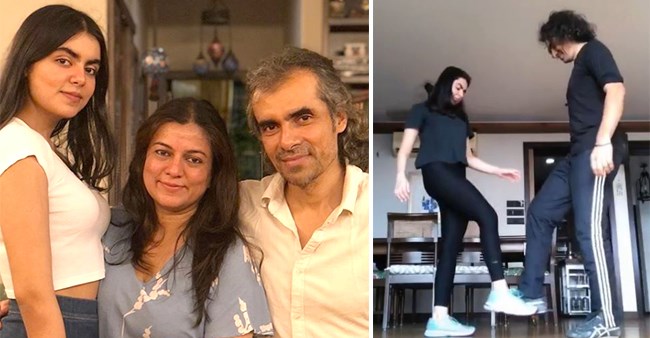 Imtiaz Ali has become a TikTok sensation as the ace movie maker along with and his sweet daughter Ida shared an amazing video that showcases the cute dad-daughter Jodi acing the ‘Oh Na Na Na’ challenge. The TikTok video features Imitaz and Ida putting on black attires as they shake their legs while performing the cool moves. The Oh Na Na Na challenge wants two contestants to follow some seemingly easy but quite perplexing dance steps.

Ida also posted some fresh pics with her loving parents. Ida did not provide any caption to the photos but the post got appreciation by a lot of people. “You look a lot like them,” wrote one Instagram user. “Lots of creative people in a frame,” read another comment.

Imtiaz and Preety were separated in the year 2012. According to reports, Imtiaz got shifted to Preety’s place due to lockdown and they called their daughter back from the United States. As per the latest reports, Imtiaz is currently in a relationship with Masterchef Australia contender Sarah Todd.

Imitiaz’s last release was Sara and Kartik-starrer Love Aaj Kal but it remained a dud and got negative reviews from critics too. He hs also penned Netflix series, She. While talking on the same, he had stated, “She is about a female cop who becomes an undercover agent. She poses as a prostitute to aid the police investigate a certain criminal nexus. It is the journey of this woman as she goes through the experience of pretending to be a prostitute, how she deals with it and what happens to her and her sexuality. Through the series, we see many interesting and hidden aspects of society, of this city and of our own personalities.”

The filmmaker, who penned the show’s tale, talked about his inspiration, stating: “I have met many lady constables. I met many prostitutes as well. I have also met women that are on different levels of this exploration. I have met a lot of women that have tried or are trying to get rid of the baggage of shame that they are suppressed by. ‘She’ is such a journey.”