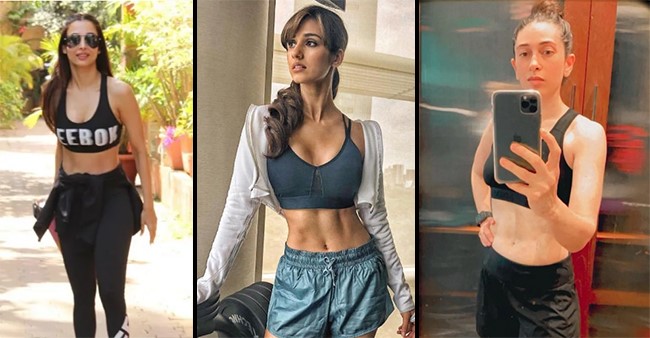 Bollywood actresses have to follow a strict diet and workout routine to stay fit for their movies. They at times undergo a physical transformation if a particular role demands the same. Thus, owing to the type of projects they sign, the celebs either shed or gain weight.

The well-known Bollywood actresses not only do their rigorous workout in the gym but also share the same with their social media family. The netizens looking at these videos get pumped up and are at times inspired to hit the gym themselves.

Here are a few Bollywood actresses who flaunted their washboard abs and made their fans gush:

Quite recently, Karisma Kapoor dropped a mirror selfie and took the internet by storm. The 46-year-old looked breathtaking in her workout outfit but the thing that grabbed everyone’s attention was her toned body. Netizens gasped looking at how the mother of two is keeping herself fit.

Actress Disha Patani is known for keeping up with her fitness regime no matter what. She is a fitness enthusiast and often blesses the timeline of her fans with pictures flaunting her well-toned body. The actress clearly raises the temperature on Instagram when she shares such pictures on the platform.

Shraddha Kapoor is a hardcore foodie but also knows how to keep herself fit. The Aashiqui 2 actress reportedly has her fixed set of workout routines, which she follows without any fail. She often shares mirror selfies with her IG fam before hitting the gym to sweat it out.

The youngest among the lot is actress Janhvi Kapoor. Despite being only two films old in the Bollywood industry, the 23-year-old enjoys a massive fan following on her social media handles. She is not only a fitness enthusiast but also is an amazing dancer.

Malaika Arora is often papped outside gyms and yoga centers. The 47-year-old is fitness conscious and makes sure to get her diet and exercise properly. Indeed, the diva is a role model for anyone who is looking forward to following a proper workout routine.

Published by siddhi ajgoankar on 06 Mar 2021