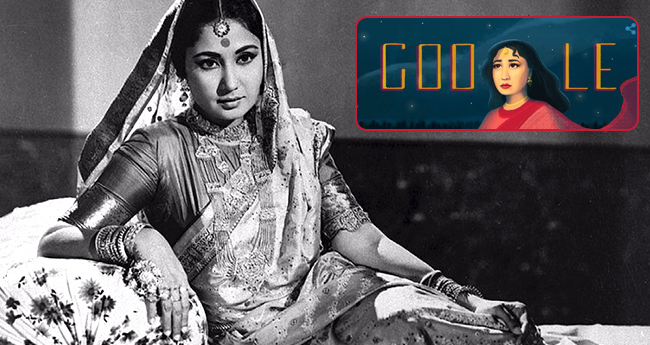 Meena Kumari wasn’t not only a brilliant actress but she is also known for her poetic and singing talent. On Tuesday she was remembered by Google by dedicating its latest Google doodle to this beautiful actress. Google recollected her memory under the pseudonym ‘Naaz’.

She was given the beautiful name Mahjabeen Bano by her parents after she born on August 1, 1933, to a Sunni Muslim named Master Ali Bux. Her father belonged to Punjab province of Pakistan Bhera. Her mother was Prabhawati Devi who was a Bengali Christian and she converted to Islam with name Iqbal Begum. She inherited the talent of acting from her father who was a theatre artist. She began her acting career at the age of four. Her family’s financial condition wasn’t good. The actress ruled the film industry for about 33 years and featured in about 92 films. Indian film critics gave her the title “historically incomparable” actress for her versatility. Audiences better remember her for her excellent work in films such as Pakeezah, Baiju Bawra, Parineeta, Sahib Bibi Aur Ghulam, Dil Ek Mandir, Foot Path, and Kaajal. She was also known for her poetic talent. In her career span of 33 years, the actress won four Filmfare awards in the Best Actress nomination. Also, in 1963 at the 10th Filmfare, she made history as she received all of the nominations for Best Actress. She lifted the trophy of the winner for her performance delivered in Sahib Bibi Aur Ghulam. She was high on her career when she fell in love with filmmaker Kamal Amrohi and they went on to get married. It was the year 1952 when she married Kamal Amrohi in a simple Niqah ceremony. Amrohi was a divorcee and had kids. The actress happily accepted his kids but she never had children of her own. However, the couple got separated in 1964 and the emptiness of a broken marriage made her addicted to alcohol.

It was the day of 30 March 1972 when Kumari took her last breath in a nursing home. She died after the release of her landmark film Pakeezah. The actress knew how to flawlessly depict the struggle of Indian women that she portrayed in her films in 50’s and 60’s. Hindi film fraternity remembered her as an example of ideal tradition woman.