After a Grand Engagement Bash, Nick Jonas And His Parents Head Back To The US 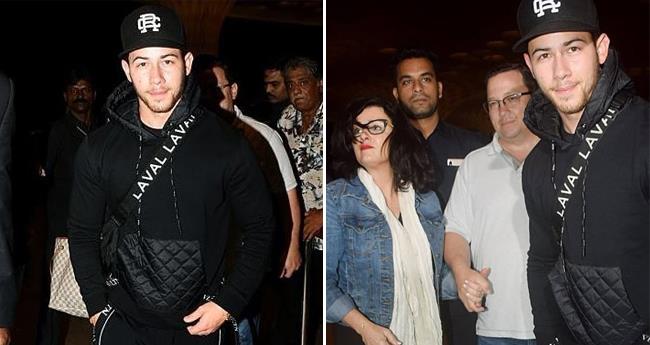 Priyanka Chopra and Nick Jonas’ relationship has been into the headlines since last few months. The duo who first met at Met Gala 2017 soon started dating each other. People speculated that something is brewing between them after they were recently seen hanging out with each other or going on dinner dates. However, neither of them confirmed it. In no time, they took their relationship further and met each other’s family. Priyanka went yo his cousin’s wedding and Nick too had flown down to Mumbai to meet her mother Madhu Chopra.

However, the couple, for the first time confirmed their relationship after their Roka ceremony that was held on Saturday morning. The duo had took to Instagram to share a love filled picture of themselves and announced their relationship. Nick called her ‘Future Mrs Jonas’. Wishes started pouring in from Bollywood celebs, fans and International celebrities as well.

Taken.. With all my heart and soul..

The Roka ceremony was followed by a grand engagement bash which was attended by several famous personalities including the Ambanis, Alia Bhatt, Sanjay Leela Bhansali etc.

ALL HEART 💕 Congratulations you guys 🎉🙌🎂🎂

American Singer Nick Jonas  has headed back to the US along with his parents after a grand engagement bash. The Jonas family was papped at airport last night. Have a look at the pictures:

#nickjonas with his parents as they leave India 🇮🇳 @viralbhayani

Nick looked handsome as ever as he sported the all black look.

However, Priyanka has not accompanied him to the US this time. This is because she has to meet her work commitments in India. Priyanka is working on a Bollywood film titled The Sky Is Pink which also stars Farhan Akhtar and Zaira Wasim. However, she has backed out from Salman Khan’s Bharat for two said reasons. One is because of her wedding plans with Nick in Sepetember. And secondly, because she has grabbed another Hollywood film.

Priyanka and Nick are ready to raise a family, Nick had said in an interview, “Having a family of my own is the goal, It’s definitely something that I hope will happen. I am not sure of the exact timeline. But, I need to give my nieces cousins at some point.”

Priyanka too had shared similar thoughts in an interview some time back. She had said,  “I am a very live in the today, maximum live in the next two months kind of person. But [in] 10 years, I definitely want to have kids. That is, it’s going to happen in the next 10 years. Well, hopefully earlier than that. I’m very fond of children and I want to be able to do that.”