After heavy rainfall, Crocodile spotted on the streets of Vadodara 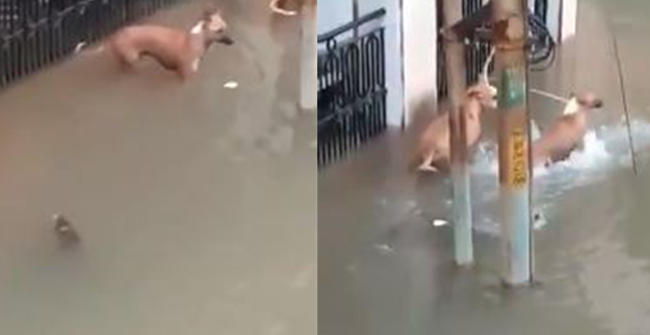 It is the season of rain. Almost all the parts of the country is witnessing a heavy rainfall. While some of the cities On Wednesday faced huge rainfall. Vadodara and Gujarat are the cities where people are facing heavy rainfall. On one hand, the raindrops brought the relief from the heat and sweat while on the other hand it has brought water to some areas and also logging problem.

The roads of the city Vadodara along with other nearby cities are under the water. What is making worse is that Crocodiles have made their entrance in the city which is creating a problem. The videos that have been surfacing on the Internet, it can be seen openly crocodiles are roaming on the roads and streets.

Have a look at the video and know what people of Vadodara are facing.

On Twitter one of the user shared about the situation with they are going. While sharing the clip, the user captioned it “VadodaraRains #Vadodara.” In the video, it is evident that in a water logged street two stray dogs are trying to safe their life by escaping from the crocodile who is wading through the water who are trying to sneak up on the dogs. Watch out the clip below.

Claims of this from Akota. What makes floods in #Baroda scarier than anywhere else #crocodile pic.twitter.com/73LZV540Tr

In the another video that has been surfacing on the Internet is shared by one of the Twitter user Shailendra Mohan who captioned it “Claims of this from Akota. What makes rain water in #Baroda scarier than anywhere else #crocodile.” It shows a crocodile casually strolling on the streets of Akota in Vadodara.

Please help the dogs. You are right there , you can let them in. Be kind, please I request you.

Just like this video, there have been many scary clips that have been shared by the people on Twitter which depicts the current situation of the streets of Vadodara.

Today, the Indian Meterological Department has predicted heavy to very heavy rainfall at isolated places across Gujarat. The school and colleges in Vadodara remained closed today due to the situation. The trains are also affected in the city as around 22 trains were cancelled. Due to water logging problem at the airport, the two flights have been diverted to Ahmedabad.