Bigg Boss 13 was one of the biggest hits among all the seasons of the controversial reality show. Not only winner Sidharth Shukla, but other contestants like Shehnaaz Gill, Asim Riaz, and Rashami Desai also became favorites to the fans and still enjoy a huge fan base on social media. The successful season raised the expectations of fans regarding the 14th season.

When Sidharth Shukla was introduced in this season too, as a Toofani senior, it was a pleasant surprise for the audience. To add to the fun, Sidharth’s champi is still being continued. Instead of Shehnaaz like the previous season, it’s Hina Khan who is seen head massage to Sidharth. 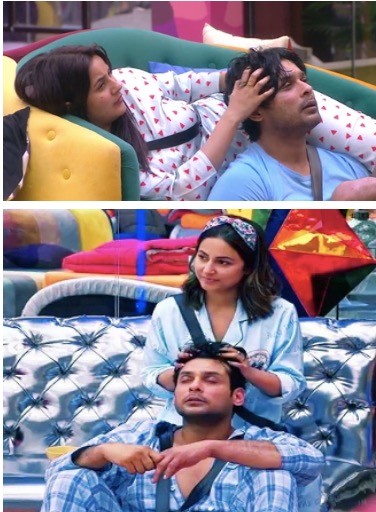 For Sid, two things remained common and that includes the reality show platform and the other is Champi (head massage). Shehnaaz did it to Sidharth in Bigg Boss 13. In this season, Hina, the other Toofani senior, is filling that place. Hina’s champi seems to boost up the BB13 winner.

When Sidharth and Shehnaaz were together in Bigg Boss, Shehnaaz was quite possessive about him. The fans speculate much about their relationship. They love to see the duo together.

Meanwhile, Sidharth is stealing the show since the 14th season has gone on air. He is seen guiding the contestants. He has been sharing good rapport with the other seniors but has had arguments with them over tasks given to the participants. At the same time, he shares light moments with them and the contestants too.

We had seen Sidharth and Gauahar argue over the tasks. But Hina remains calm and composed.