“I want to educate and lead others by setting an example”: Mizoram’s minister says as he mops a hospital floor 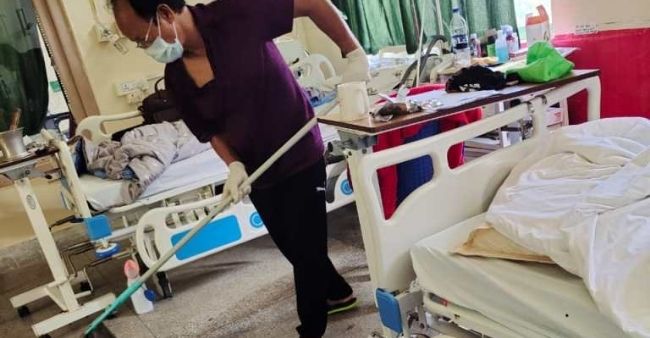 Mizoram’s power and electricity department minister, R Lalzirliana, was seen mopping the floors of a hospital on Friday, where he is being treated for COVID-19 alongside his wife and son. The minister’s action was not intended to embarrass medical personnel or authorities, but rather to set a good example for others. Mizoram, a state that condemns VIP culture, had witnessed several instances of ministers living as common men by performing household chores.

“My motive in mopping the floors was not to embarrass the nurses or doctors but I want to educate and lead others by setting an example,” Lalzirliana told PTI. He stated that he had called the sweeper because their room was a mess. However, the sweeper did not responded to his call, prompting him to do the job himself, he explained.

Mizoram Minister Pu.R Lalzirliana who was admitted to Zoram Medical College(ZMC) Aizawl,
after he was found COVID positive on 11th May, 2021 is seen here mopping the hospital floor… pic.twitter.com/iO9Dxvitjd

The 71 year-old veteran politician and his wife Lalthangmawii (59) were diagnosed with the infection on May 11. His son was also found infected with Covid-19 on May 8.

Initially, the three of them were placed in home isolation. On May 12, they were transferred to the state’s only dedicated COVID-19 hospital, Zoram Medical College (ZMC). The minister stated that he began experiencing mild symptoms on Thursday, but that he is no longer in danger and that his oxygen level is stable. He stated that they had been in the mini-intensive care unit for two days and would be transferred to the COVID ward on Friday.