I told Priyanka if she was going to represent India, she couldn’t come across as a Yankee sounding person, says Sabira Merchant 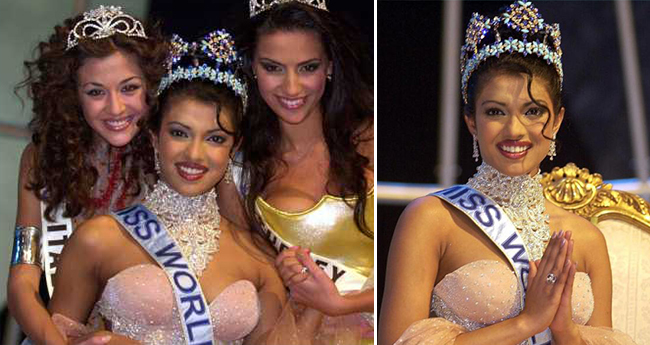 2000 was really an amazing year. Three of our country’s most gorgeous females managed to pocket the most coveted international titles.

Therefore the beginning of the millennium was very special for the country however it seems PeeCee had to do lots of hard work to become the first runner’s up at the Miss India occasion that year. One of which includes her pronunciation too. Piggy Chops manages to get the right accent and makes Malaika Arora go wow when she responded to SRK‘s question at Miss India 2000 pageant.

But for that, Sabira Merchant, Miss India coach, is sharing some engaging tales into its 17-year-old champion who sealed the crown during the year 2000.

Sabira had to ensure the actress knocked off her pronunciation which she had developed during her stay in the US. Guarding the same, Merchant stated, “It was an honest American accent which she had picked up naturally. Nothing was put on. When you are that young, you are impressionable and you pick up the accent you are hearing all around you.”

But, Merchant that it was tricky for her to make PeeCee drop the pronunciation, “She had that kind of a nasal twang. I told her if she was going to represent India, she could not come across as a Yankee sounding person. You have to sound Indian in front of the crowd or at least you should get a global English accent and not American English.” But, it simply would not do for a Miss India competitor to talk with the usual American tone and Sabira worked really hard with Priyanka to do it. She explained to the young teen that if she was going to represent India, she could not come across as a Yankee sounding person. “You have to sound Indian in front of the crowd or at least you should get a global English accent and not American English.”

Priyanka rose to the challenge wonderfully. Sabira recalls the young girl even following her to Mumbai’s SNDT University where she taught at the time! “And I would be like, “Now Priyanka we have done enough work. You can relax, you are okay.”

But PC would appeal for a little extra practice, just one extra question. “She was so bent on improving herself. She was so keen that it was just unbelievable,” remarks Sabira. She also recalled PeeCee being rather innocent and “always rushing into things”. At 17, that’s comprehensible! She did keep her head and wow the judges as well as the viewers at the Miss India competition that took place at the Poona Club on January 15, 2000.

The beauty took the name of celebrity judge SRK to ask her question. He remarked, “I am as nervous as you are, I go meek in the presence of beauty.”

Smiling all through, Priyanka responded, “If I was to choose one of these three very difficult choices, I think I would go to a great Indian sportsman. Because when I come back home, or when he comes back home, I know I will be there to be his support to tell him I am proud of him, just as India is. To be able to tell him, ‘Hey look, you did your best and you are the best,’ and I will take immense pride in my husband who will be a man of strong character if he can bring so much pride to my country. Thank you very much.” Always a winner, our PC!