I’d rather be with my children than be anyplace else, says doting dad Shah Rukh Khan 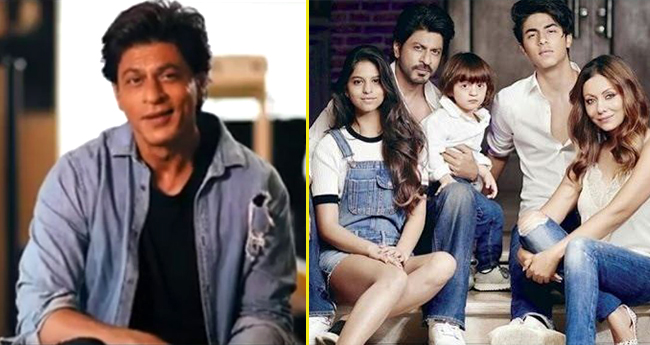 Recently, King Khan completed his 26 successful years in the Hindi film industry. On the special occasion, SRK has posted a special video recording to share his happiness with his buffs.  Shot by ace movie producer Aanand L Rai, the special video recording showcases King Khan’s exceptional journey. But for him, the main highlight in his 26 year exceptional voyage is parenthood. About his handsome son Aryan, a proud dad stated, “Suring the year 1997, apart from being blessed with your love, a stork had delivered my first baby, Aryan. And I still tell him that he was delivered by a stork though he is old enough to know how babies are made, or at least I hope so.”

Remembering the birth time of his darling daughter Suhana, SRK stated, “The new millennium brought in two new babies. One was a pretty girl we named Suhana lovingly. “Pleasantness”, love, happiness. The second was Phir Bhi Dil Hai Hindustani. This year taught me the importance of risk-taking and obviously, the beauty of fatherhood all over again.”

A lovely holiday climaxed with the new Speed Skiing champion of the world by my side.

During the year 2012, the actor confronted really hard time. It was a difficult time for Shah Rukh as the super star lost his guide and father figure, Yash Chopra. But, he had a very big reason to smile the very next year.

The kind-hearted and bade dilwala King Khan said, “2013 made me shake off the sadness, play a mithaiwala and “get on the train, baby”. Speaking of which, I was visited by the stork again, with my beautiful little angel, little AbRam. The next Happy New Year made some people laugh and very many cry, but as long as my ‘Dilwala’ AbRam giggled at his father’s shenanigans, I decided to shut off the negativity (and believe you me, there was lots and lots of negativity).”

Thanks to Thanksgiving got to spend time with my lil one.

In 2017, during a special interview session with media people, King Khan had stated that being with kids Aryan, Suhana and AbRam gives him real happiness. He wants to see his kids smiling always and nothing else in the world is of prime importance.

And a fulfilling Father’s Day at Arth designed by @gaurikhan

“I have no other interest in life. People find it very strange. There’s only one interest high up in life… that is to play with children. I love kids, and not in the nice, pat-sy way; I just love kids. I like being around them, and I have three of them. I’ve really had some amazing times with them. I’d rather be with my children than be anyplace else. That’s the only thing I’d rather do more than acting,” he added.