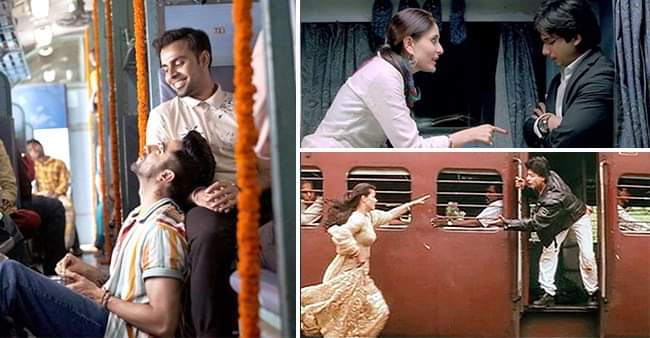 The classic movie Dilwale Dulhania Le Jayenge had many famous scenes. One of the famous scenes was when Simran’s father allowed her to follow her dream and go with Raj. Simran ran to catch the train and Raj gave her his hand to hold. This is one of the best examples of Bollywood for using the idea to do romance on the train.

The second movie on the list is also one of the most iconic movies in Bollywood. In the movie Jab We Met starring Kareena Kapoor Khan and Shahid Kapoor, Kareena played the lead role of bubbly Geet and Shahid played the role of super-rich Aditya. We saw how Geet and Aditya met on a train and how their story started.

We saw a simple Naina went with her friends on a trip where she met Bunny. Naina allowed Bunny to enter her thoughts and Bunny got to know Naina more. They began knowing each other during the train journey.

In this movie, train gave the lead actors a place to confess their love to each other. Aditya confessed his love to Suhani on the local train.

In this movie, they tried to make a replica of the scene of ‘Dilwale Dulhania Le Jayenge’ but for the love between the same sex. They also filmed so many scenes on the train, including a make-out scene.