Incredible Ghatam Performance By A Man Wins Over Millions Of Hearts; Enjoy Video 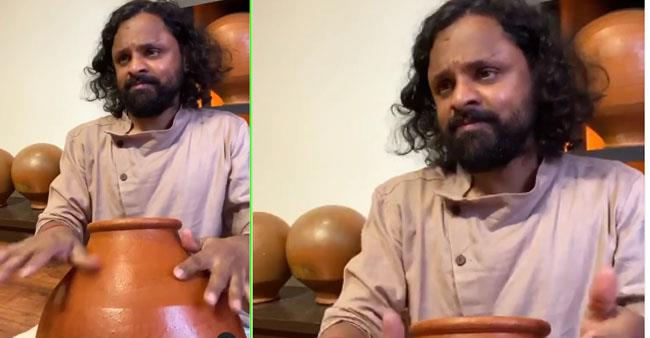 Music has the power to influence anyone and anytime. They calm our minds even if we are in tough situations. Social media has plenty of such musical performances having the power to soothe your mind. A video in which a man is playing ghatam has recently caught the eyes of all the netizens. The clip is for sure to fill your mind with happiness and bring a smile on your face.

Percussionist Ghatam Giridhar Udupa has shared the clip on his personal Instagram profile. He is seen playing the instrument from his heart. At the beginning of the video, he is seen tapping on the instruments with his fingers to play, a tala from Carnatic music called the Tishra Nadai.

“Groove in Tishra Nadai!” reads the caption shared along with the video.

The post has been shared on 22nd September and has received more than 17.2 million views. Viewers have poured in tons of comments too. Some left fire emojis while some others dropped clapping hands emoticons. Some wrote appreciating words too. The artist’s exceptional skills with the unusual instrument amazed them all. A user mentioned his fingers to be faster than lighting. Another user wrote that he was speechless.

Comments like “his fingers are faster than lightning,” “This is soo amazing,” “I’m just speechless,” and others were seen on the post.

Apart from carnatic music, he is a master of Jazz fusion too. He is a member of the team of classical musicians who efficiently blend various forms of classical, world and folk music. The team is called Layatharanga.

He is the director of Udupa Foundation, which promotes music, culture and performing arts. He has been already honored with many awards and accolades at the age of 40 only. The list includes national and international awards too. He has performed in many countries to glorify Indian classical music in front of the world.

Arbaaz Khan talks about the toxic social media cancel culture, expresses his disappointment with the disparity...

Electrifying Bhangra Performance On ‘Gasolina’ Will Be Your Go-To Sangeet Act With Your Family...

TV actors celebrating Ramzan with their families during the lockdown...