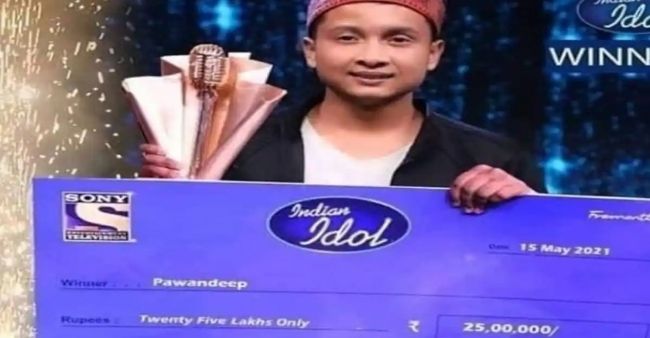 Indian Idol 12 has finally come to an end with its Grand Finale but a picture with the same has been leaked on the internet. The leaked picture has created a buzz on social media networking sites. In the leaked pictures, contestant and participant Pawandeep Rajan are seen with the winning trophy of Indian Idol 12 and hold a cheque with bags a total amount of Rs 25 Lakh under his name.

If the leaked photos are indicating the true scenario by revealing the name of the winner of Indian Idol 12 then it is time to celebrate for the fans who had supported and want to see Pawandeep Rajan winning and bagging back the trophy of the singing contestant, Indian Idol 12.

If reports and photos are to be believed then the Indian Idol 12 journey has been a dream come true for the boy who belongs to the hills. The praising is coming for him from all the b quarters. Moreover further adding to the list of achievements he has been also received the chance of marking his voice and singing in Karan Johar’s Dharma productions and emerging as the composer for T-Series along with Ashish Kulkarni. Pawandeep Rajan left everyone impressed when he sang on the first day while playing the piano.

Shailesh Lodha of TMKOC trolled for making an appearance on The Kapil Sharma Show...